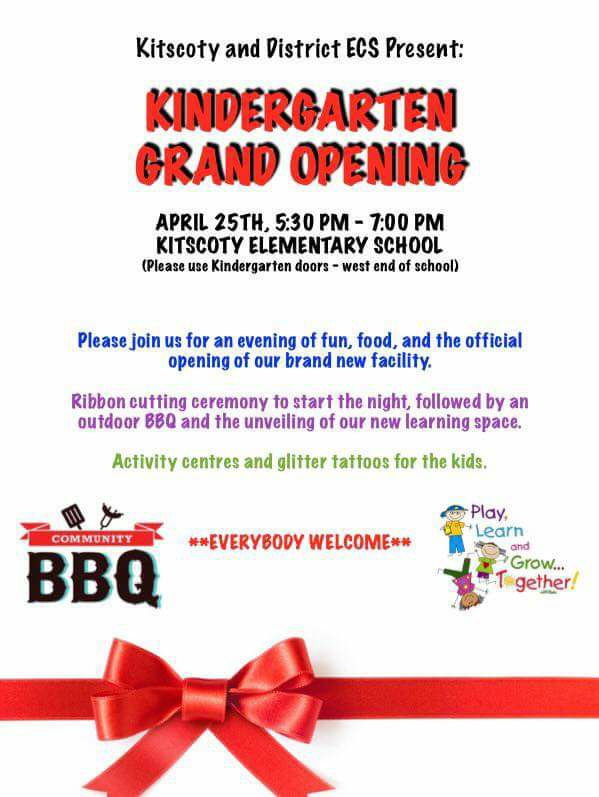 The Kitscoty Kindergarten is holding their Grand Opening for their new building Tuesday evening at 5:30 at the Kitscoty Elementary. The event will feature a ribbon cutting ceremony, a barbecue and a tour of the new facilities.

“Anybody that is curious about the program, this is a great time to come out and the teachers will be available to answer any questions that people might have and it’s open to everyone,” says Erin Garnier, the President of Kitscoty Kindergarten.

The Kindergarten was located within the elementary school, but with space constraints the private elementary school needed to get their own space or become part of the Buffalo Trail Public School Division, this resulted in a community effort to get a modular classroom to continue the program.

“It was a huge undertaking to take that on, to make that building happen, that modular happen, but they did it and it should be a great source of pride for that community,” says Kyrstal Becker, a teacher for the Kitscoty Kindergarten.

The modular is attached to the west side of the elementary school.

One of the big differences between a public kindergarten and a private kindergarten is the way it is operated.

“All the money that comes into the kindergarten stays with the kindergarten itself, all of the board positions are non-paid they’re volunteer so we’re able to do things like keep class numbers low and keep adult to student ratios very low as well, so there’s a lot more support in the classroom,” says Dustin Newman, former President of the Kitscoty Kindergarten.

Newman adds that the special needs program is where this is really noticed.

“When it comes to special needs kids, because we’re private, we get an evaluator in early in the year to evaluate all of the kids, to identify special needs whether it’s language issues or learning challenges with different students so we’re able to evaluate those much earlier than the public system.”

Newman adds that the addition of the modular was a collaborative effort.

“Buffalo Trails was involved with us the whole way through, putting the extra modular attached to the classroom, so it wasn’t an us versus them. We worked with them on getting it installed.”

There are 49 students enrolled currently in the Kitscoty Kindergarten.