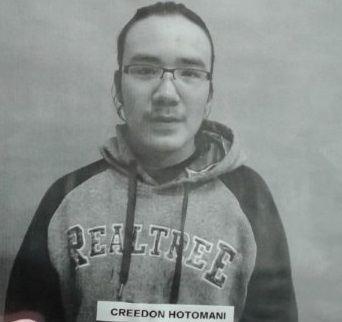 UPDATE: Police have received information that Hotomani may be with his mother in Regina, but have not been able to confirm.  Police are requesting that Errin Hotomani contact police to confirm his safety.

Hotomani was reported missing from the Saskatchewan Hospital shortly after 9:30 p.m. on Monday, Feb. 26. He is described as Indigenous, 5’5″, 170 lbs with long black hair and glasses. He was last seen wearing a light grey sweater, baseball hat and blue jeans.

Creedon is from the Carry the Kettle First Nation and RCMP say he may be heading that way. Anyone with information about his whereabouts is asked to contact Battlefords RCMP at 306-446-1720.