Battlefords RCMP on the lookout for armed robbery suspect

Battlefords RCMP say they are looking for a man who may be connected to an armed robbery in North Battleford.

Police were called to a store in the City’s 1100 block of 107 Street, after a suspect allegedly attacked the store owner with a hatchet and a made off with merchandise. The owner was taken to hospital with non-life threatening injuries.

Security footage was able to catch a picture of a person who may be connected to the robbery. He is described as about 5’8″, 140 LBs with a slim build and having thick shoulder length brown hair which may have been dyed red previously.

A witness also says he was wearing a grey sweater that had “RAW” written on the front, black sweatpants, a red hat with a black brim, a red bandanna around his neck, white Nike shoes and carrying a small purple backpack.

Anyone with information is urged to contact the RCMP or Crime Stoppers. 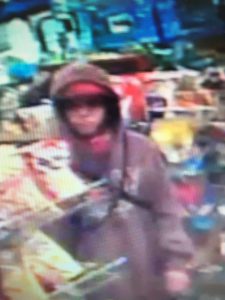