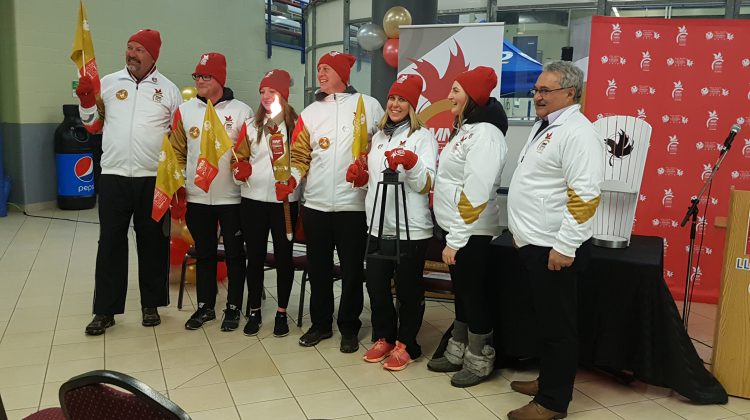 The torch for the 2019 Canada Winter Games made its stop in Lloydminster this evening. The Roly McLenahan Torch was relayed from City Hall to the Servus Sports Centre(SSC) in its first-ever stop in the Border City.

Councillor Diachuk represented the city, and it was his first time to participate in such an event. He mentioned being proud to be running with the torch and that it was an unforgettable experience.

“I’ve never had to the opportunity to participate in an event like this, and with the torch, it kind of elevates the whole process,” says Diachuk. He adds that the experience of being cheered on with the torch was almost surreal.

“Normally when you’re running down the street they’re not cheering for you, but now they are because you have a torch and a jacket. But they did a great job, the folks who organized this, and it’ll be a memorable experience for sure.”

MLA for Vermilion – Lloydminster, Dr. Richard Starke, was also a torchbearer served as Minister of Tourism, Parks and Recreation in September of 2014. He announced in Calgary the host city for this year’s games and mentioned the value of sport.

“It’s a very cool feeling. I’ve always been a big believer in the positive impact sport can have on society in general, but especially on participants. Whether its athletes or coaches or volunteers or officials. Sports teaches us a lot of positive things about life,” says Dr. Starke.

Dr. Starke adds that these lessons are things he tried to emphasize to the athletes he coached the Border Blades Speed Skating Club.

“Things like perseverance, respect for your opponents and the rules and officials. These are things when I was coaching that I really emphasized to the athletes, that they were more important than winning or losing. It’s just such a neat thing to see the torch pass through Lloydminster on its way to the Winter Games.”

The Canada Winter Games hopes to bring unity to Canada through sport. Throughout his coaching career, Dr. Starke saw the games help many athletes achieve goals beyond them like the Olympics.

“Getting to the Canada Winer Games was one of their big goals, cause they knew it was a stepping stone to going on to other things, like Olympic competition, national or international competition. Some of those athletes have done that.”

After stopping in nearly fifty communities across Canada, the torch will make its way to Red Deer for the Canada Winter Games on February 15.