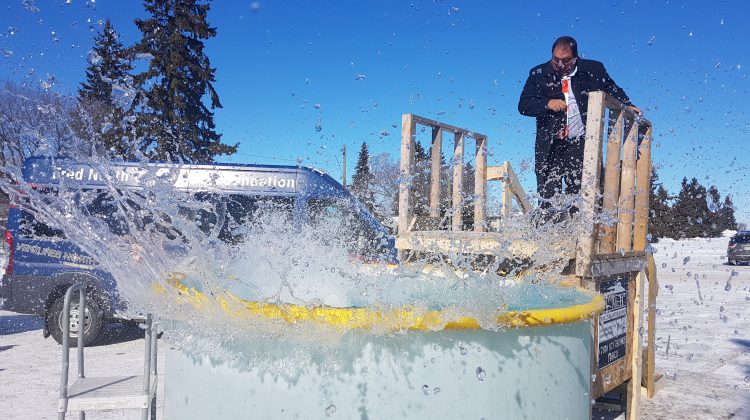 Mayor Gerald Aalbers gets some of the splash from Councillor Johnathan Torresan (B.COLLENGE/106.1 THE GOAT)

Some big names from around the Border City braved icy cold water to help people in the community.

Over the time leading up to the Polar Plunge, residents, politicians, and media members raised pledges towards for the former Handivan Society, now known as Border City Connects. The non-profit provides rides in Lloydminster for residents with mobility issues.

Director of Border City Connects Glenn Fagnan says they are still waiting on some last minute donation slips to come in, but he estimates the total could be between $22,000 and $25,000.

“We’re very pleased with that amount. That’s a big boost, it purchases a lot of fuel for us, which is one of our biggest expenses, so we’re very happy.”

The Border City Connects bus makes as many as 16,000 trips a year, and Fagnan says the continued community support is very important to them.

“We don’t get a pile of money from government agencies. We have the fares that we charge, but the majority of our funds coming in is from fundraising. ”

He adds that the event also was a success because of the volunteer support.

LCHS joins nation-wide project to collect socks for the homeless

Heritage Building on the market