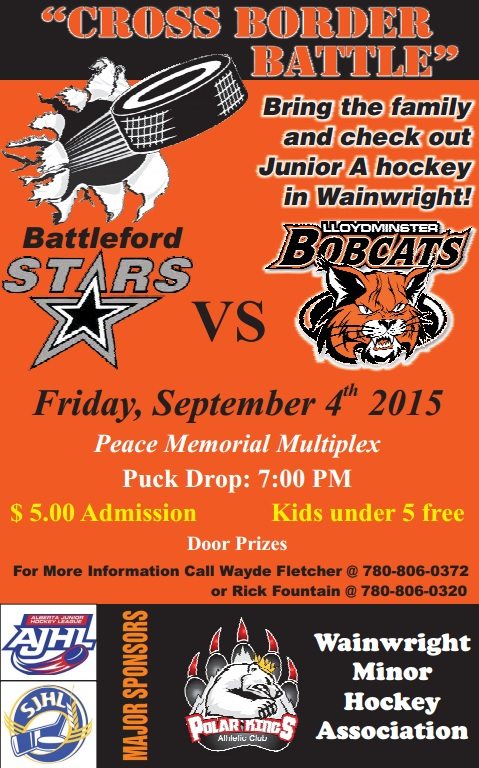 The Lloydminster Bobcats and the Battlefords North Stars of the Saskatchewan Junior Hockey League are gearing up for the Cross Border Battle.

The two teams are playing an exhibition game in Wainwright on Friday, September 4, with all proceeds going to minor hockey in the community.

This is the second time the Bobcats and the North Stars are playing in Wainwright, having played there once before in 2012.

Wayde Fletcher, president of the Wainwright Polar Kings says the turnout to the first match was big.

“All I can remember is just the admission gate, how it was outside and down the sidewalk,” Fletcher said. “That was before we had our bucket seats, so there wasn’t really a head count taken, but I would have estimated that there was probably around 600, 700 people there, for an exhibition game… A Polar King game, if we have a good turnout, we’re looking [at] probably around 250, 300 [people].”

Kevin Hasselberg, coach of the North Stars, said he enjoys maintaining a relationship with the community.

“There [are] a lot of good, young hockey players that might not get the opportunity to play at a highly competitive level, just because of the distance between major centres,” Hasselberg said. “That extends from Wainwright, all the way down to Medicine Hat. Those kids can develop in those rural communities and no one knows who they are. I think Curtis Glencross would be the best example of that. We have to treat the community of Wainwright and the minor hockey system with a lot of respect because of what they have provided for our organization.”