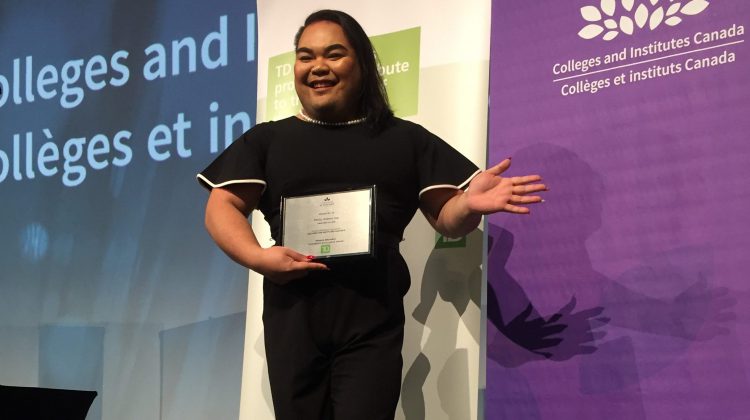 Lakeland Student William Yap has been recognized as one of Canada’s top student leaders for his commitment to gender diversity and inclusion. Last week, Yap received the bronze Leadership Excellence Award for Students from Colleges and Institutes Canada at their annual conference in Niagra Falls, Ontario.

CICan’s annual conference is a large event gathering post-secondary education leaders from across the country and around the world to network, discuss practices and spotlight the future of colleges and institutes.

President of the Lakeland LGBTQ+ Support Group and organizer of Lakeland’s first Pride Awareness Week in 2018, Yap says that Lakeland had already offered services for LGBTQ+ individuals, but he believes the one thing that was missing was a student-led initiative.

“That one student that would reach out, and really create things, and really make that representation. That’s why I thought if we don’t have a spectacle, let me be the spectacle.”

Before beginning Business Administration, Yap had a prior stint at Lakeland in 2012. At that time, Yap says he was going through an inner turmoil, not yet comfortable with who he was.

“When I was walking around these halls I didn’t see any representation. I was that kid that would have wanted to talk to someone who had already figured themselves out so they could tell me ‘Hey, I know exactly how you’re feeling. This is how you can work through it.’ I just wanted to be the person that the younger me would have really needed.”

Yap adds that the initiatives towards diversity and inclusion at Lakeland show that the motto of student-led innovation and leadership holds true. He says he was honoured to take home a CICAN award for his efforts but was blown away by students across the country.

“What was great about it was to see how many students there were doing the same amount of change and passionate work that I was doing. It really made me see and think that I am not the only one, and thank god I’m not the only one, that’s fighting for change.”

Yap says recognition is never expected in student leadership positions, he believes the biggest victories is seeing new students want to come to Lakeland because they know its a safe place to be themselves.

“My goal, knowing that this is going to be my last swan song year at Lakeland, is that I will spark at least one flame in one these younger children’s hearts to take up the torch and keep the fight going. Because now we have built the momentum, it would be such a shame to end now.”

Yap believes that putting the conversation of gender diversity and sexual orientation into the hands of younger, up and coming post-secondary students will help set up further growth and development within Lloydminster and surrounding areas.