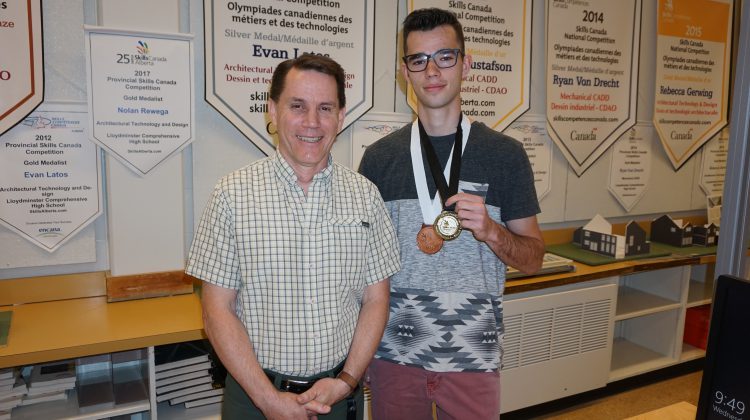 One LCHS student managed to score big demonstrating his drafting skills. Cole Stephens has returned from Skills Canada Nationals in Halifax with a bronze medal after having won gold at Skills Canada Alberta.

While in Halifax, Stephens took part in a four-point drafting competition designing a fish finder monitor. Everything from 3D printing to assembly drawing, renderings and parametric models put his skills to the test. Having won medals both provincially and nationally, Stephens believes it’ll reflect well as he pursues engineering at the University of Saskatchewan.

“I think it’ll be great on resumes, scholarships, things like that, to say I competed on a national level at something I’m passionate about.

The road to nationals was a long one. On a grade nine visit to LCHS, Stephens entered the drafting classroom and was enamoured by the concept. Three years worth of drafting in school, followed by an extra hour of practice every day, went into training for the competition. Stephens wasn’t anticipating gold at provincials when he designed a combination square and camshaft.

“It’s a pretty incredible experience. It was definitely something I didn’t expect going into it, so it was something I was happy I could achieve,” says Stephens.

Training for nationals became a lot more intense. The competition consisted of five other competitors, and while he didn’t win gold, he’s thankful for the support of his school. Stephens also credits his teacher, Don Yusep, for helping him achieve the level of skill he has.

“He’s the only teacher and coach I’ve had in drafting, and he definitely knows what he’s talking about. He was a big help.”

Don Yusep teaches design studies, drafting and mechanical computer-assisted design (CAD). His room is decorated with banners of students who’ve won at provincial and national skills competitions. Yusep believes the success of his pupils is a sign he’s teaching right but also believes it comes down to more than his instruction.

“We’ve done really well in the past, but you’ve gotta have really great students to be able to do that. They’re dedicated, they have passion in the area and show that they can compete against the best in the country,” says Yusep.

Lloydminster and Estevan bring in $2.3 million in oil and gas land sales