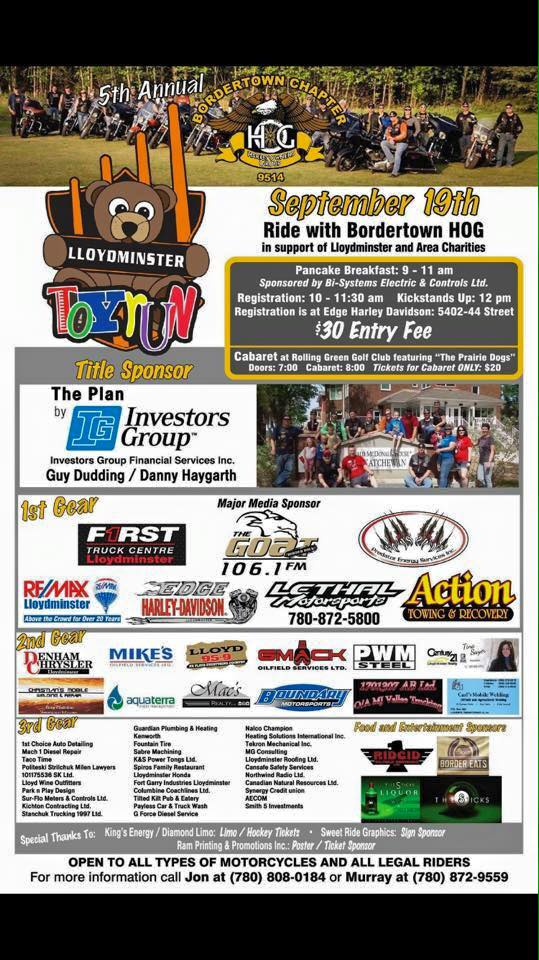 The Border Town Harley Owners Group is gearing up for the Toy Run on Saturday, September 19.

Motorcycle riders from across the city will be meeting up in Edge Harley Davidson’s parking lot to raise money and toys for Big Brothers and Big Sisters, the Lloydminster Community Youth Centre, and Kidsport.

Organizer Guy Dudding says the run has shown a lot of growth since its start.

“Five years ago, we were just sitting around having a few drinks, and decided that we were going to have a toy run, not really knowing exactly what the response would be,” Dudding said. “It’s just exploded every year since then. We keep multiplying ourselves. The first year was 100 riders, and about $5,000 raised, and last year I don’t know how many riders we had, 110 [or] 120, and $60,000 dollars raised, so we’re trying to raise the bar again.”

“It’s definitely doable,” Dudding said. “What put us over last year was the pledges, so the people that were in the ride going over and above the $30 entry fee. They were going out and getting friends and family, coworkers and so on. We had about $9,200 which put us over the top, getting to that $60,000. We’re always hopeful that we want to make it bigger and better, [with] more money going back to the charities, and more toys going back to the charities. We’re in the home stretch, and from here on out, we wait for the day and see what happens.”

Registration for the run is $30, and will take place at 10:30 a.m, with the ride starting at 12 p.m. Anyone wishing to donate toys to the run can go to Taco Time, The Sticks, Boundary Motor Sports, and Edge Harley Davidson.