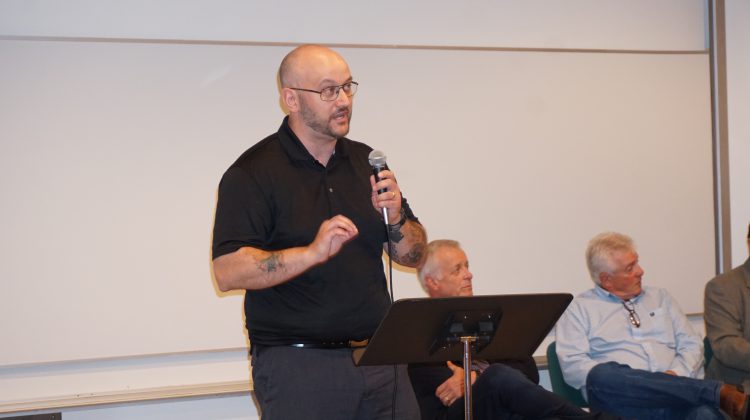 Peter Downing of Wexit Alberta believes confederation is unbalanced and that western provinces are better off separating. (Photo by Brendan Collinge, MyLloydminsterNow.com staff)

The idea of western alienation is being discussed around western Canada and is bringing with it talks of separation. Lloydminster and area residents had the chance to discuss these topics at the city’s very own Wexit Alberta/Saskatchewan rally.

Wexit is the tern coined for western Canada separatism, including the provinces of Manitoba, Saskatchewan, Alberta and B.C. The rally drew nearly a full room in a lecture theatre at Lakeland College for people to discuss what a real Wexit might look like. Peter Downing, spokesperson for Wexit Alberta, spoke to those attending arguing that Alberta is better off without eastern Canada.

“It’s fantastic being able to speak and to listen to folks asking questions to us directly, and give them a straightforward, non-scripted answer, to be able to say ‘this is the alternative we present, this is how we plan to solve your problems’,” says Downing.

Downing says that the way Canada distributes representation is inherently unfair towards western Canada. Ontario and Quebec each hold 95 and 75 seats in the House of Commons, while the four western provinces hold a combined total of 77 seats. By these numbers, Downing says the government will always be decided by Canadians who are fundamentally opposed to our region’s politics.

This unfair representation has, according to Downing, a number of different consequences. Downing believes that the energy and agriculture ministry are currently under attack and federal mismanagement, over taxation and regulation are all to blame. With this in mind, Downing believes we’re hopeless as a collection of provinces to effect any change.

“We’re saying hey, you know what? Albertans can govern Alberta better for Albertans, than what they can (do) in Ottawa right now. Because it doesn’t matter, we are completely outvoted. Our federal vote does not count.”

The other side of the provincial border also brought representation to the table. Allan Kerpan, spokesperson for Wexit Saskatchewan, came on with Wexit Saskatchewan earlier this summer as a number of townhall meetings were held. Kerpan says the purpose was to gauge the level of alienation felt in across the province, and based on the attendance numbers, believes it’s very present.

“The one that I did in Estevan was well attended. Similar to Lloydminster it’s in the energy sector. They’re really struggling down there, and are looking for solutions,” says Kerpan.

Kerpan likes to discuss the problems faced by western provinces and what the solutions might be, and presents how these feelings have been felt before. He quotes a sentiment felt just before the 2015 election where it was claimed someone would rather vote for a separatist in Quebec than live another four more years under the Harper government. While Kerpan doesn’t consider himself a hardline separatist, he says that this feeling isn’t far off from what many others are thinking and that this election may prove pivotal to the movement.

“I’m saying a similar thing. I’m saying I’d vote for an independent Saskatchewan rather than live another four more years under (the) Justin Trudeau government. A lot of things will hinge on what happens in October, and I think that’s the key.”