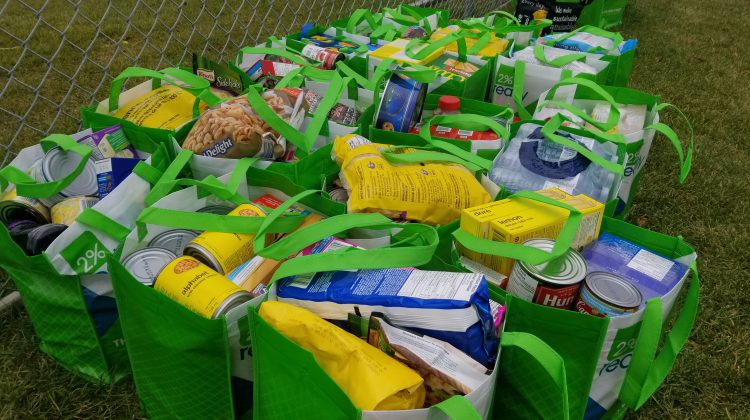 Over 3,000 pounds of food was gathered for both Lloydminster food banks in a slo-pitch tournament on October 5. (106.1 The Goat/Nikita Ganovicheff)

Lloydminster’s slo-pitch community swung for the fences to support the city’s food banks.

The community held an 11 team tournament on October 5 at the Legion Ball Park and collected over 3000 pounds of food and close to $2,000 in donations for Lloydminster’s food banks.

Teams entering the tournament had to pay a $100 deposit which they would get back if each player brought in 10 pounds of non-perishable food. There were 10 to 12 players per team which meant almost every player brought in twice the amount they needed.

All the money brought in from concession sales as well as bottle and can deposits went towards the food bank donations.

Cartina MacDonald, the owner of 2% Realty, sponsored the tournament and says the community always comes to support the needs of Lloydminster’s less fortunate.

“A lot of the teams have said to turn the money around and donate it to the Olive Tree and the Salvation Army so not only do we have all the food but there have been cash donations from the teams.”

Rochelle Smith, one of the organizers, says the women’s league wanted to do one last tournament and find a way to help the community before Thanksgiving.

“We were standing around after a game thinking this would be a good idea. Catrina said ‘Let’s do this’ and put it together in two weeks.”

MacDonald wasn’t surprised by the amount as she saw similar support when the community held the Brandi Leask memorial tournament which brought in $33,000 last summer.

“If you saw how the city came out and supported that one I had pretty high expectations for what would come of [the tournament] and I’m definitely not disappointed. We’ve done a great job of getting everybody out and showing all the community support and really showing what Lloydminster’s slo-pitch community can do.”

The donations will be split evenly between the Salvation Army food bank and The Olive Tree food bank.