Federal candidates take on range of topics in Lloydminster forum 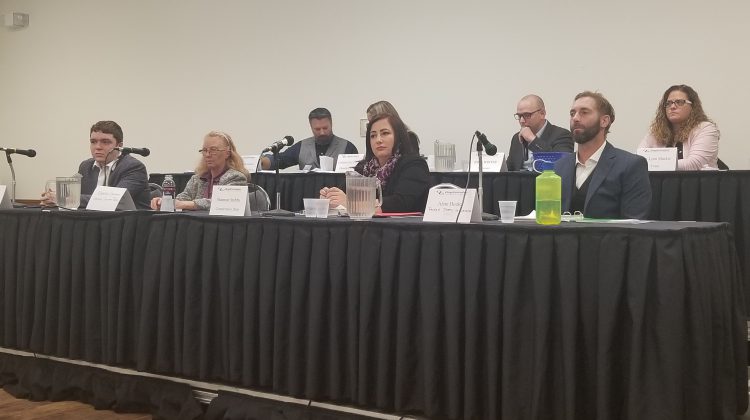 Four of the seven Lakeland riding candidates were in attendance of the all-candidates forum on October 10. (106.1 The Goat/Nikita Ganovicheff)

Lloydminster residents were able to speak face to face and ask questions to those running to represent the Lakeland. The Lloydminster Chamber of Commerce held the all-candidates forum at the Lloydminster Exhibition Centre on October 10.

Topics ranged from the budget and tax reforms to rural crime and trade relations. On the subject of rural crime, Conservative candidate Shannon Stubbs says it’s been the biggest issue raised during her time as MP.

“We have to stop this revolving door of repeat offenders because of the slap on the wrist sentencing. We would increase sentences and penalties with the rights of law-abiding Canadians ahead of criminals and increase more support for victims of crime.”

When asked about his biggest priority if elected, Jeffrey Swanson says he will tackle the high cost of living within the riding.

“Our plan is to make it so that you’re paying less on healthcare fees and that means a universal pharmacare plan and a universal dental care plan. We’re also looking at capping internet and cellphone fees so that it does not exceed global averages. Canadians have been historically ripped off on those bills.”

Veterans Coalition candidate Roberta Graham was asked about cutting deficits to reduce future interest. She says she would cut her own wage by 20 per cent if elected MP and would also cut GST by one per cent a year.

“It’s another tax that’s totally false. It doesn’t do any good for anybody along with the carbon tax which needs to be repealed immediately. We need to cut expenses in Ottawa all around and trim the fat.”

Alain Houle of the PPC was asked about what strategies would they use for the current trade relationships with China, India and the United States. He says Canada should have a minimal role in the United Nations and should work with whoever is occupying the White House.

“We’re having a lot of trouble with China not taking in our products like pork, beef and canola so we need to look and bolster relationships with other countries. We want to maintain and work closely with our allies, especially the United States. They are our biggest defender and trade-partner.”

The election will be held on October 21 and advanced polls run until Monday, October 14.