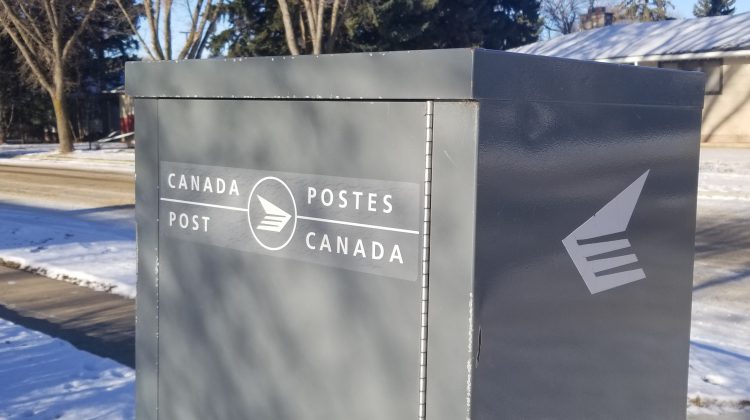 Canada Post is encouraging residents to clear their walkways and get their parcels in before the holidays. (Nikita Ganovicheff/106.1 The Goat)

Canada Post is reminding Lloydminster residents about the upcoming deadlines for sending packages and cards during the holiday season.

Items being shipped by priority mail to places within Canada have a deadline of December 23 and December 11 for regular parcels.

Items being shipped by priority mail internationally have until December 18 and shipping to the United States has a deadline of December 19 for priority shipping and December 10 for regular parcels.

Canada Post Local Area Manager Tamara Penner says the latest someone can send a card out is December 23 but they will have to pay extra to get the card out on time.

Penner says there are options for people who are expecting a package but aren’t home during the holidays.

“They have the option to safe drop and great service that we offer at Canada Post is called flex delivery. It’s a free service. If someone is not home and they want a package delivered they can send it to anyone of our Canada Post locations and it can be held on-site for 15 days.”

According to Penner, an average of 600 to 1,000 parcels and packages leave the Lloydminster facility on a daily basis. She asks residents to keep their sidewalks and driveways shovelled and clear of ice as postal workers have the right to refuse delivery if they believe it isn’t safe.

“It’s really important to remove snow and ice from walkways, driveways and around the mailbox. We’re hoping that customers are willing to de-ice the stairs, entrance and path to their mailbox using salt or sand. Keep the stairs and handrails free of obstruction and in good repair. During this time of year, we make about a million parcel deliveries to Canadians every day and it’s a lot of walkways and stairs to deliver holiday parcels.”

Penner says major weather events will also affect deliveries and Canada Post will put out service alerts on their social media accounts. A red alert means they will suspend deliveries for the day and a yellow alert means deliveries may be late or pushed to the next day.