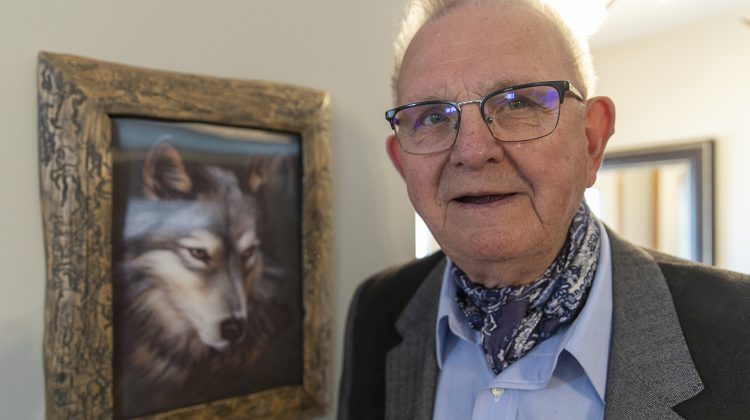 Curly is an avid hunter who has taken part in week long safari's around the world. (Submitted.)

At 78-years-old Lloydminster resident Eugene “Curly” Hallan is celebrating almost 20 years as a realtor after a late-career change; he doesn’t plan on slowing down anytime soon.

Curly has had an eventful life that has included a lot of travel, a late-career change, a lighting strike and two battles with cancer.  He encourages everyone, no matter how down life may seem, to try to stay positive.

Hallan came to Lloydminster in 1995 as a farm equipment salesman and worked in the field for much of his life.

He says he decided on a career change later in life because it was something he’d always wanted to do.

“At the age of 59, I opted to get into real estate, guessing if that would work or not, but I did and it has worked out great for me.”

He decided to turn to real estate saying “no two houses were the same, resulting in ‘not the competition from down the road'”. Next year, Curly will be celebrating his 20th year as a realtor with Century 21.

Aside from becoming a top realtor, even gaining centurion status in 2007 as part of the top seven per cent of agents in Canada for units sold, his career also led him to his new family.

Curly has been a bachelor his whole life. He has never been married and he has no kids. He says this is due to work being a big part of his life, as by the time he got “the girl bug,” he says he was too old to pursue a relationship.

In 2014, Hallan was helping an expecting couple find a home for their new family. He previously knew the wife as she was a nurse who had helped him fix his lifestyle when he was diagnosed with diabetes.

Hallan says the wife refused to sign the papers unless he agreed to one thing: he would agree to be a grandfather to their son Logan, as both of the couple’s fathers had passed away.

“I said no. At 75-years-old, I am not going to go to university to learn how to change dirty diapers,” Curly jokes.

After thinking about the offer, Curly says he felt selfish since it was a great honour and accepted.

“The time that hit me the hardest; he was just starting to talk. They phoned to say they were having a burger at Carls Jr. and I said I would be right down. I walk in the far end and he is down on the floor playing with his cars. His mom looked down at him and said ‘ Logan, look who’s coming through the door. His cars went flying, he got himself up, flew his arms out and said ‘grandpa’ for the first time.”

Hallan’s nickname, “curly” has followed him since his youth when he had ringlets of curly black hair on his head. He lost this identifying feature during his bouts with cancer but couldn’t shake the moniker.

Curly was declared cancer-free in 2000 after battling the disease since 1995, However, in 2005 he was told he had developed colon cancer. He says those years were a setback for him but he was able to overcome it and continued enjoying his life and career. During his second fight with cancer, Curly even went on an Alaskan cruise and took a two week holiday to New Zealand.

“Every other doctor has said ‘it is all due to your positive attitude’. I guess that’s what pulled me through.”

Curly says he’s proud to be a part of Lloydminster. He volunteers for six different initiatives in the community including Meals on Wheels to deliver food to those in need.

Curly seems like he had a life pulled straight from a novel with unbelievable stories including surviving a lightning strike in 2011. He was driving to Saskatoon during a storm near North Battleford and says he refused to pull over.

“The loudest bang I have ever heard in my life and it flashed, like a welding flash. I had a cooler sitting on the seat next to me plugged into the cigarette lighter. It fried the cooler, it never touched me and there was $28,000 damage to [my truck]”

Curly says the most important advice he could give anyone in life is to have a positive attitude.

“I am not going to get down in the dumps because I have a cold or something. I am going to get over it in the few days, life goes on. Take something more serious and look at it the same way.”