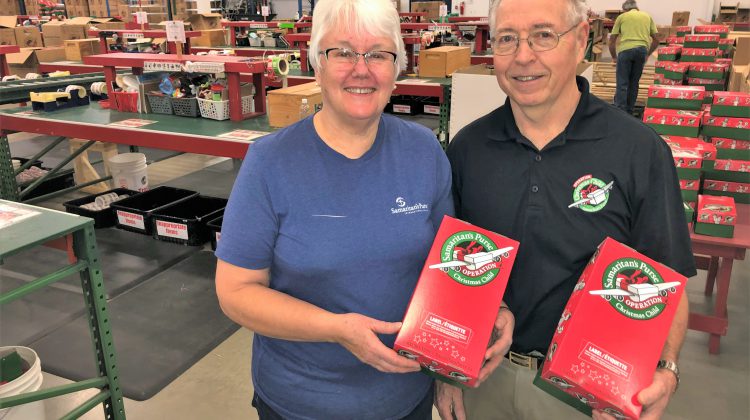 Ruby and Laurin Trudel have driven to Calgary to do the final inspection of the Operation Christmas Child shoe boxes for the past three years. (Photo: Samaritan's Purse Canada)

A Lloydminster couple is taking part in the final steps of Operation Christmas Child before the boxes are sent to children in need.

Ruby and Laurin Trudel made a six-hour drive to Calgary to inspect the shoeboxes and ensure the boxes are able to make it through customs. Ruby says even though there are clear instructions on items that can be sent some items still get through.

“People still include toothpaste, candy and shampoo which is a no-no. Somebody even added a can of spaghetti sauce this year.”

Every shoebox collected by Samaritan’s Purse is sent to a warehouse in Calgary where they are inspected. The boxes are then sent to countries in Central America and Western Africa.

Ruby says it’s now a Christmas tradition for the two as they’ve made the trip for the past three years.

“It’s the most fun Christmas activity that we participate in. You can go to concerts and musical performances and stuff like that and just be passive. This is something we can be very active in and we have tremendous respect for Operation Christmas Child and Samaritan’s Purse.”

She says she’s also taken part in other initiatives with Samaritan’s Purse including a medical trip to the Philippines with other people from Lloydminster.

Trudel says it’s not too late to pack a shoebox and encourages people who pack the shoeboxes to head down to Calgary next year.