UPDATE #3: Both Waylon and Cody Armstrong have been found unharmed. Cody is now in police custody.

UPDATE #2: Cody Armstrong’s truck has been found back at his home. RCMP cannot confirm if they are inside.

Police continue to have a large presence at the home. They ask the public to avoid the area and not to report any police activity on social media.

UPDATE: The RCMP says Cody Armstrong took a long barrel rifle with him when he left the home in Brule. Waylon and his mother were visiting Cody at his home when an argument took place and Cody left with Waylon.

Cody is considered armed and dangerous and should not be approached. If you have any information of Waylon’s whereabouts, contact Hinton RCMP at 780-865-5544.

Alberta RCMP has issued an AMBER Alert for 14-month-old Waylon Armstrong who was abducted from his home in Brule, near Hinton, Alberta. Waylon Armstrong has blonde hair, brown eyes and is wearing a onesie with moose on it. 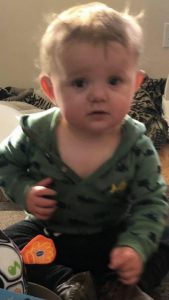 Waylon Armstrong was abducted from his home in Brule. (Photo: Hinton RCMP)

Waylon Armstrong was abducted at 3:40 am, December 20th, 2019-by his Father Cody Armstrong. Cody Armstrong is 5’9″ tall and 170 lbs.,  with blonde hair, brown eyes and is wearing a grey shirt with grey Stanfield long johns.

Do not approach the suspect or vehicle if located, call the police immediately. If you have any information regarding Waylon’s whereabouts, contact Hinton RCMP at (780) 865-5544. 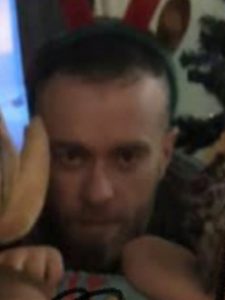 RCMP are looking for Cody Armstrong who is driving a 2002 green GMC Sierra. (Photo: Hinton RCMP)