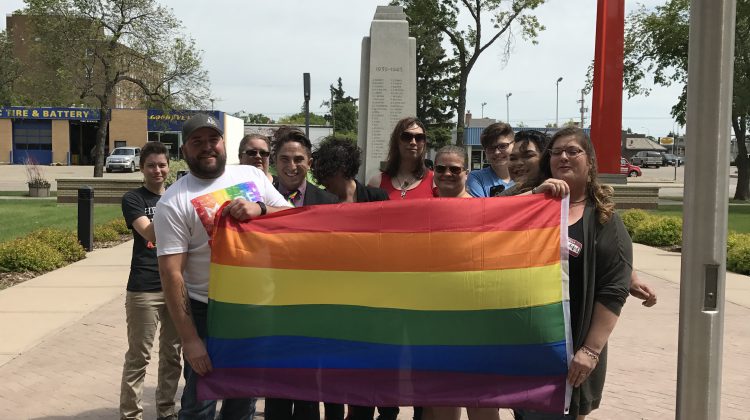 Members of the LGBTQ Community outside of City Hall. (Courtesy: City of Lloydminster.)

The LGBTQ+ Society of Lloydminster has announced a partnership with Grace United Church where the group will be hosting their first meet and greet.

The society hopes to hear what the general public would like to see from the group moving forward during their meeting on January 20th.  Founder of the local LGBTQ+ Society, Tiffani Wiesner says Grace United has been in touch with the group since last year’s Pride.

“It’s a non-religious denomination, meaning, they’re just a really big supporter of our group and have reached out wanting to help.”

After posting the meet and greet information to a public Lloydminster Facebook group, Wiesner says the group did receive some negative comments.

“For every negative person, there was a positive person out there. To be honest, it was more negative against the church then against the group. It’s unfortunate to see that, but we always have way more positive than negative.”

Ever since they reached out, the church has thrown fundraisers for the LGBTQ+ group looking to help spread more awareness in the community.

The LGBTQ+ Society continues to grow in the community. Recently, the group registered as a corporation, which makes it easier to accept funding for anyone that wants to help out, according to Wiesner. She says they will have to wait until they’re in a better financial state in order to register as a non-profit.

The LGBTQ+ meet and greet will take place at Grace United Church on January 20th at 7 p.m.