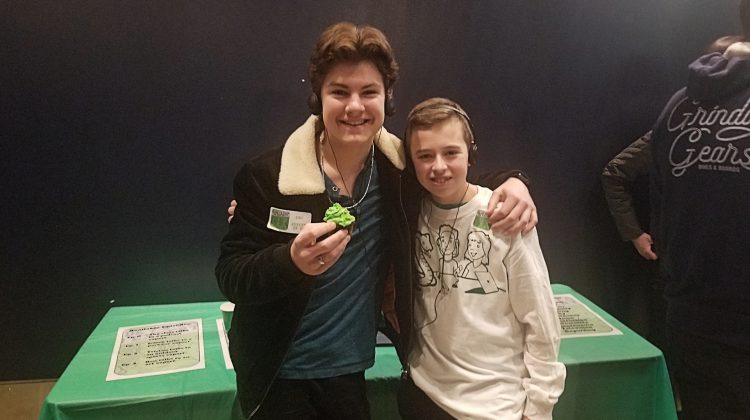 The College Park grade 7 class has launched a podcast called Grade 7’s Talk to Experts. Each episode a student will interview a local expert about a subject they are interested in.

In the first episode, teacher Cornelius Krahn and the students spoke to local podcaster Shaun Newman to learn how to podcast.

In the next one, student Isiah Kippenhuck spoke to Eric Reinhart about parkour. Kippenhuck says he loves to parkour so he wanted to interview his parkour teacher.

“It was pretty scary at first but once I got going it was very easy because it was just like having a normal conversation,” says Kippenhuck as the first student to do his podcast. “I’ve learned to talk a lot more when I’m talking to people. I used to be quiet but now I’m more outgoing because of the podcast.”

Reinhart says he enjoyed the experience and the students did a great job.

“I’m honoured to be called an expert. It was an awesome experience. I’ve done some interviews in the past and I enjoy telling people about what I do and the sport,” says Reinhart. “Podcasting is the next thing and a lot of these kids I can see that podcasting could be their job.”

Students pick up new skills with this project such as learning how to edit audio, writing and conversational skills. Krahn says the podcasts are also a collaborative effort between the students.

“They’re also talking to their classmates who are suggesting questions for them. The host then chooses which questions they would like to borrow and they will choose three or four students from the class to come in during the interview. At the end, we have an open mic time.”

The first four episodes of Grade 7’s Talk to Experts were released on January 24 with new episodes scheduled every Friday until the end of the school year. The class has recorded eight more which will be edited and released at a later date.

The podcast is available on Apple Podcast, Spotify, Google Podcast, Stitcher, RadioPublic and through Anchor FM by searching Cornelius Krahn.