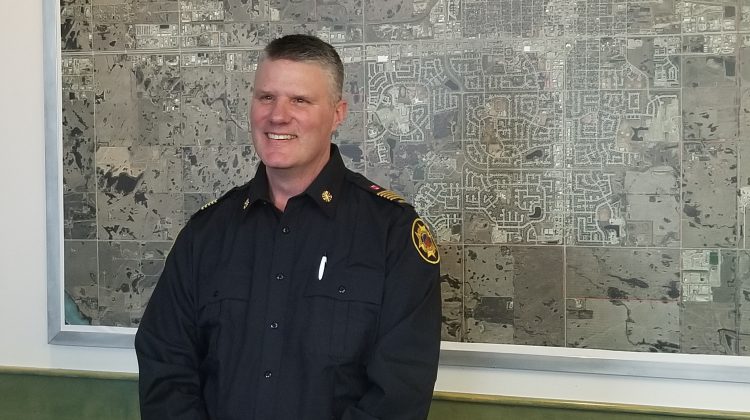 Leigh Sawicki has been hired as the new fire chief for the city. (Photo submitted by: Nikita Ganovicheff, mylloydminsternow.com)

The City of Lloydminster has found its new fire chief.

Chief Leigh Sawicki has taken over the position as of February 10. Sawicki has over 20 years of experience as a firefighter and was formerly the fire chief at the Wetaskiwin fire department for five years. Chief Sawicki says he’s excited to take on the challenge of working in the Border City and the recent changes to its department.

“It’s unique and I think there’s going to be challenges associated with it but I think it’s going to be looking after two different types of regulations depending on which side of the city you’re on. It’ll be fun to learn.”

The chief has a lot of work ahead of him as the city begins to implement recommendations based on their fire master plan. Sawicki has looked through the plan and says it’ll take some time to learn about the ins and outs of the department.

“Right now we’re just looking through it and discussing with administration to find what are the best priorities to look at at this point.”

“Change is always good and eventually we’ll get to that point.”

City Clerk Doug Rodwell says the city received several qualified candidates for the position but Sawicki’s experience working in a department that experienced several changes put him a cut above the rest.

“He comes to us as a very qualified person who can bring positive change. We have a new department that has gone to a paid-on-call model and we think he’s uniquely suited to foster them through that change and bring them out to the other side a stronger and better department.”

“Five years ago it was a challenging time from a training aspect to operating procedures within the service. From there we changed the process in Wetaskiwin,” says Sawicki.

Sawicki’s wife and four children currently live in Wetaskiwin but will be moving to the Border City once the school year is done.