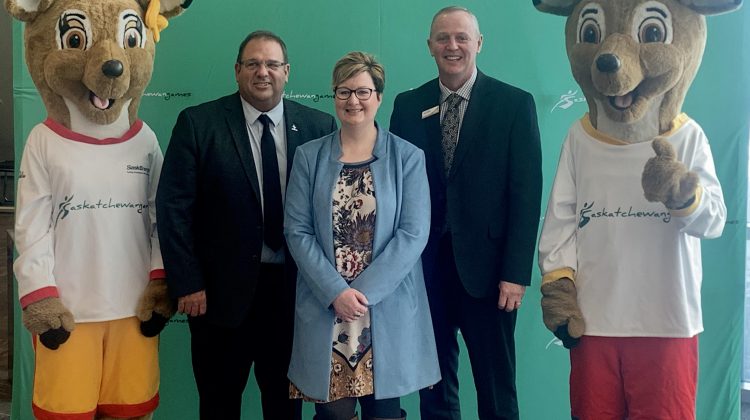 The 2020 Saskatchewan Summer Games is officially open to members in the community looking to contribute. The Games’ Host Society made the announcement on Feburary 20th at Synergy Credit Union, the Game’s volunteer sponsor.

The 2020 SSG Society Volunteer Chair Wendy Plandowski says 1200 volunteers are needed for the Games in six months. For those who didn’t get to experience the Games’ in ’82, ’97,  and ’08, she says volunteering is a tremendous opportunity you won’t forget.

“It’s an opportunity to feel like you’re part of something bigger. When you sit down and think back about the Games’ and think about how athletes benefit in so many ways. It’s not just about the competition, the athletes themselves are getting to experience something that’s pretty magical.”

In his opening remarks, Mayor Gerald Aalbers mentioned how it’s been a two-year process since the City put the bid in to host the Games’.

“We have been waiting for 2020 and now it’s here. I was so excited to come here today and say the people can now go onto website and clicking ‘I want to be a part of this’ and getting involved as a volunteer. Today, we start the countdown to the Games.'”

In the spirit of competition, the announcement kicked off with Mayor Gerald Aalbers and Synergy CEO Glenn Stang seeing who could register first accompanied by the Games mascots, Tansi and Ravi.

Although he was the second to put his name in the hat as a volunteer, Stang says volunteerism aligns with Synergy’s core values.

“We have six or seven key people, right now, involved in organizing the games. Going forward I know that many of our staff will step up and volunteer. It’s just who we are.”

Last year, the Synergy staff accumulated over 7800 volunteer hours in different aspects of the community. Being a part of the games in 2008 with his wife, Stang says events like these build and foster a community.

“Especially right now with the tougher economic times that, we’re facing, I say general morale is lower. When you get together like this, it’s almost a time to celebrate; you can have a lot of fun and engagement. It will actually pick up spirits in addition to the economic value it brings to the community.”

Anyone looking to volunteer for the 2020 Saskatchewan Summer Games can head to its website. Plandowski says volunteers are needed for every aspect of the Games’ including athletes village, food services, and computer entry.