Lloydminster middle schools get a lesson in storytelling 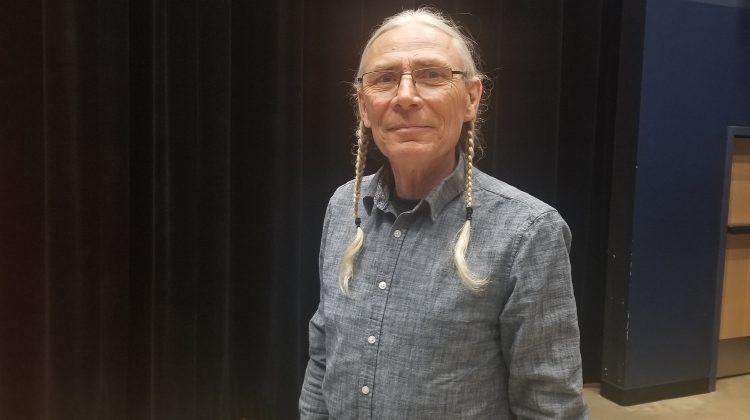 Harold Johnson is committed to teaching about the power of storytelling.

Johnson is a Saskatchewan lawyer and author. He has written several books in the non-fiction genre focused on issues faced by Canadian First Nations. He has also written fiction books that blend traditional Cree mythology with the modern-day.

During his presentation, he talked about the power of storytelling and shared both traditional stories and stories about his past. Johnson says his goal is to show the students that the stories people tell can both help and hurt others.

“We have to be careful of what we say. We’re in the Facebook era now and people are not being careful with what they say which can hurt people. Today we’re seeing youth committing suicide because of the stories being told about them on Facebook and other forms of social media.”

Johnson used the examples of placebo and nocebo to illustrate his point. If a doctor gave a sugar pill to a patient telling them it would make them feel better, the patient can convince themselves and improve the outcome. Nocebo would be the opposite, where a patient is given a sugar pill saying it would have negative effects, their body would then exhibit those effects.

Johnson believes if people can tell themselves these stories which would have these effects, they should also learn to challenge them.

“We have to challenge a whole bunch of stories that we’ve been told that are leading us in a direction that society shouldn’t necessarily be going in.”

He says while it’s important to share stories, listening to them is also as important.

“We have to listen to the settler’s stories. We have to listen to Aboriginal stories. I noticed today that the big item in the news is the Government of Canada is in talks with the Wet’suwet’en. Talks aren’t as important as listening. Maybe if the two sat down together to listen they might get somewhere.”