LPSD students pedalling for a purpose 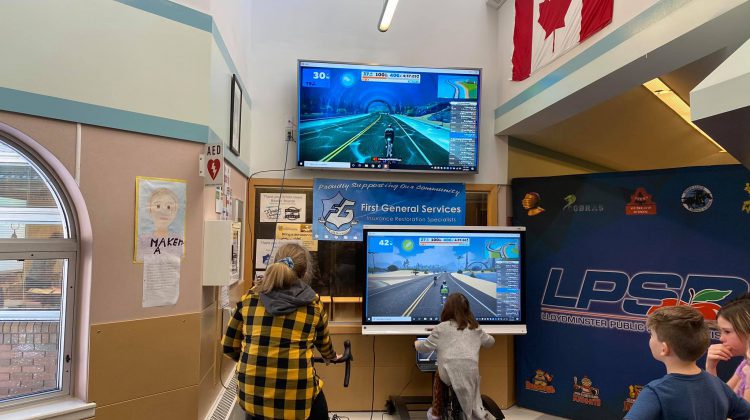 Rendell Park School students are riding across Canada for charity.

Lloydminster Public School Division has brought in an indoor cycling machine to the school for their “Pedal for a Purpose” charity. Students are asked to bring in a small donation to participate in the fundraiser.

“It’s really cool because you’re playing to help the Handivan and you also get to ride a bike.”

The charity is starting in Rendall Park and will be there for 2 weeks before moving on to the next school. Each school gets to pick their own charity.

They are also using a videogame program called Zwift which creates a virtual track and enhances the ride. The school will be keeping track of how far they’ve ridden as well as inform the students of some of the places that they’ve passed on the journey.

LPSD Educational Technology Consultant Shelley Merth says every student has been scheduled to ride the bike for 10 to 15 minutes but students have been coming back for multiple runs.

“Now they’re asking to be on the bikes before school, during recess time and at lunch. They can’t wait to get back on there. They’re really liking the game side of it and try to cycle faster and farther than they normally would.”

She also says it’s not just the students who are participating.

“We have the bikes on all day through the school day and open at night for adults, teachers and parents to ride. They can go as fast and as far as they want and then they’ll challenge the next school to do even better.”

Merth says the pilot program promotes health and wellness in the students as well as unity within the community.

“I hope they get a sense of the cycling technology that’s out there and maybe they’ll want to cycle more when they get their real bikes outside and the sense of giving back to the community. The community does so much for the schools and we wanted to do a little bit to give back.”

Grade 6 student Taya Shiach says the older students have been helping the younger students on their ride across Canada.

“It’s fun helping, especially with the little kids because they don’t know what’s going on and it’s fun to help them out and see the excitement on their faces.”