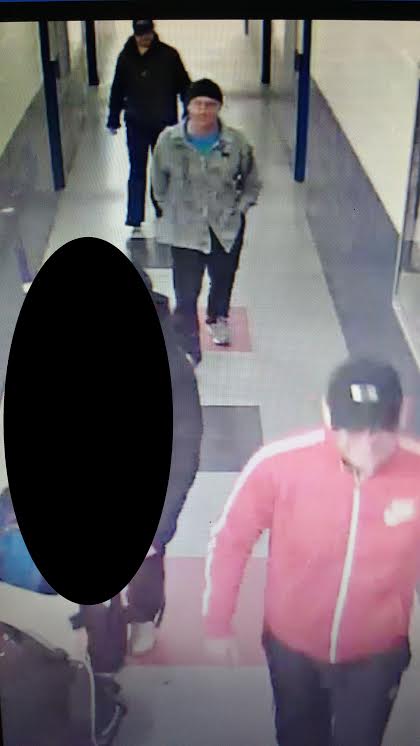 Lloydminster RCMP are asking for the public’s help in find several suspects in a theft.

The RCMP say that in the afternoon Wednesday, November 25, they responded to a call of someone going through dressing rooms at the Servus Sports Centre. Three suspects stole drivers licenses, credit cards, money, and other belongings from the rooms. Shortly after the thefts, several purchases were made in Lloydminster using the stolen cards.

The first suspect is described as a white man with a slim build, clean shaven, approx 50 years old, with short brown hair. He was wearing black track pants with a white logo on the upper left thigh, a black leath jacket with cloth sleeves, a black ball cap with an Orange County Choppers logo on the front, and black shoes.

The second suspect is described as a white man with a blonde mustache and an average to stocky build. He was wearing a blue t-shirt, a tan or khaki jacket, a button-up collared long sleeve shirt with animal print, jeans, a black toque with a white cross, and white sneakers.

The third suspect is described as a white or First Nations man, with short dark brown or black hair, is clean shaven, and a lean muscular build. He was wearing a cherry red Nike track jacket with a single thick white stripe on the sleeve and a white zipper, black track pants with a thin white stripe down the leg and a white logo on the upper left thigh, a black ball cap with a white logo on the front, and white sneakers.

All three suspects were captured on surveillance camera, and are in the above still image.