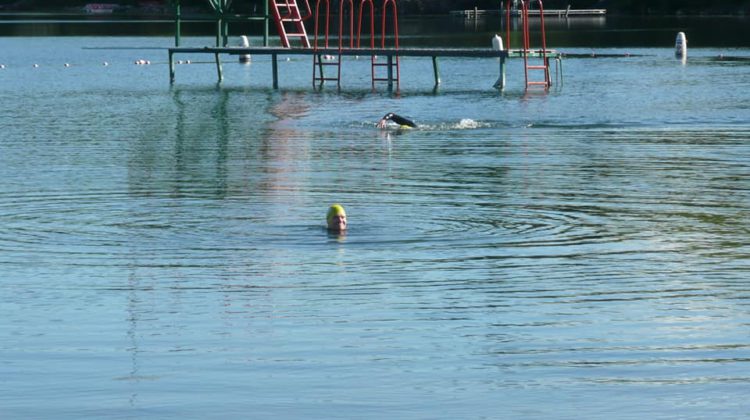 A Lloydminster runner went all-in on a triathlon last weekend to help cancer treatment and research.

Pam Rollheiser was set to run in the ITU World Grand Final in Edmonton this year, but the event, like many others, was cancelled due to the pandemic. While she was dismayed the race she had trained all winter for was cancelled, she decided to undertake what started as a one-person triathlon.

Rollheiser says she was initially going to join the Relay for Life, but the CCS encouraged her to start her own event, which became Tri 1 for Life.

“The thought just kept going through my head. ‘I want to help others, I want to help others.’ So I started thinking about how I could help others, and I decided I would do a fundraiser. The Canadian Cancer Society came up to me because my family and lots of friends have been touched by cancer. So I very naturally went to them.”

The fundraiser made money by Rollheiser pledging to run, swim and bike more distance depending on how much money was sent to the Canadian Cancer Society via her webpage. Her pledges ended up bringing in almost $4,000 before her event even began, so she bumped up to an Olympic level triathlon. Her route began at Sandy Beach for a half-hour timed swim, then a 40KM bike ride to Grace United Church, before finishing off with a 10KM run.

She also had some help along the way, as Gridin’ Gears, the Lloydminster Runners and friends came out to support her. Her family also came along, with her husband Nathan swimming and biking with her and her son Jonathan doing a four-hour walk raising money. He also added music to his, with every $50 donation meaning he had to learn a new song and perform it. Her daughter Valerie donated some of her hair to the Cancer Society.

“We actually had people stop my support vehicle,” Rollheiser says, “It was my dad in the support vehicle as I was on the bike, and people stopped him on the side of the road and handed him some money. So it was pretty neat how it all kind of came in that way.”

She adds that people were also inspired to get active by getting out their running shoes or their bike, which was another goal of the event.