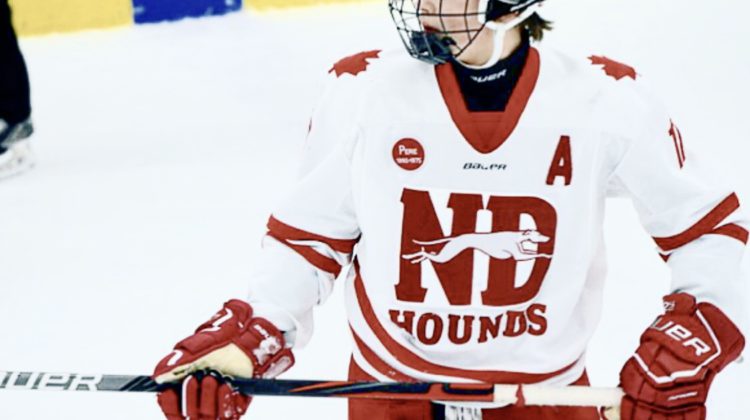 A Lloydminster hockey player was awarded with a scholarship for academic excellence after finishing Grade 9 with a 96.6 grade average.

Theoren Brown was the recipient of the Chancellor Frederick W. Hill Scholarship from Athol Murray College of Notre Dame in Wilcox. The scholarship is given to five students entering Grade 10 or 11 for top academics in Math, English, Science and one Social Science and is worth $3,000.

Brown was able to balance his grades while also playing for the Notre Dame Hounds U15 AA team. He says his dad was the first one to tell him he got the scholarship.

“I was in shock. I put in hard hours and a lot of long nights doing homework, especially with the distance learning. To hear that I was one of the five picked for the academic scholarship, it made my day. It made my week.”

Brown says being able to do well in both academics and athletics is important to him. Before the pandemic caused disruptions for the team, Brown would practice with his team, workout and then had a one hour study period.

“I would usually take an extra half hour to do any extra work and make sure everything was done and I was caught up. I would make sure to go ahead and I was able to practice with no stress from the on-school workload. That seemed to help a lot, doing anything extra that I can.”

The most important skill Brown has learned during this time is proper time-management. He says it’s what will help him get through the next few years while balancing both.

Brown chose to play with the Hounds after attending some of their camps. Before joining the team, he made the decision to switch roles from forward to defenseman in order to get more ice time. He enjoys playing with the team and picked up three goals and six assists in 28 games before the season was cut short as the team missed the playoffs.

Brown is preparing for a return to the ice and has split up his training schedule through different camps across Saskatchewan. He also says he’s bought a pair of rollerblades to help him prepare while waiting for rinks to reopen.

“I’m a little nervous because I haven’t been on the ice for three or four months. It’s going to take a little bit to get used to but I’m excited. I’ve been looking forward to getting back on the ice for while and I’m thankful I’ll be on the ice soon.”