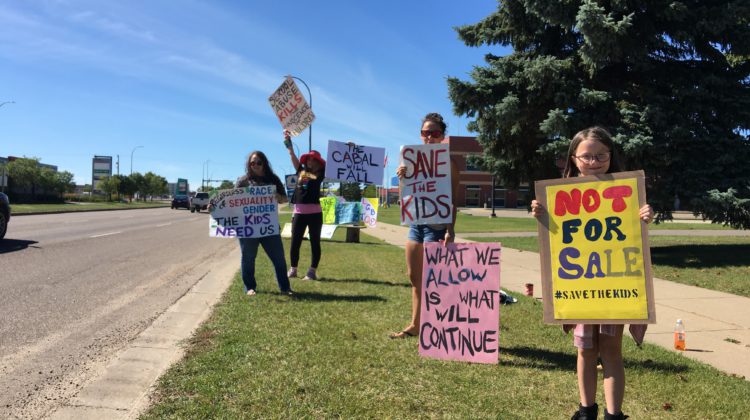 Demonstrators at the Save The Kids rally. (Kalie MacIntosh, 106.1 The Goat)

A group of activists gathered near Highway 16 outside of City Hall to raise awareness of child trafficking.

Statistics Canada notes reports of human trafficking have been rising since 2010. The document shows 1,708 reported human trafficking incidents between 2009 to 2018 and 73 per cent of victims were under the age of 24.

The bill was passed in May and most changes will go into effect in January 2021. The Government of Saskatchewan also announced they would be working on legislation similar to the bill passed in Alberta.

In July, the federal government announced $19 million in funding to stop human trafficking and support victims of it. About $14 million will be distributed by Women and Gender Equality Canada (WAGE) and $5 million through Public Safety Canada. The funding is a part of the government’s five-year National Strategy to Combat Human Trafficking.

In December, the Joy Smith Foundation announced they would be expanding their services into Lloydminster. The foundation organizes presentations to inform people about the signs of human trafficking and how to prevent it.

Maidstone RCMP on scene at collision in Lone Rock