Over 200 COVID-19 cases reported in Alberta, one active in the County of Vermilion River 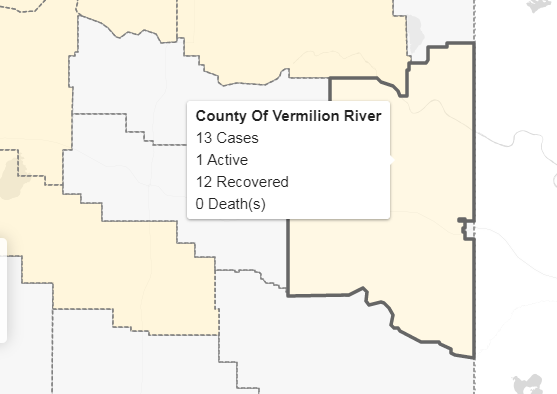 There have been no new cases of COVID-19 reported in either the M.D. of Wainwright or the County of Vermilion River, despite a large number of new cases reported over the weekend.

According to Alberta Health, one case in the County of Vermilion River is still active and the area has recorded a total of 12 recoveries. The M.D. of Wainwright had 57 recoveries and two deaths.

Across the province, there were 83 new cases recorded on August 21st, 106 on August 22nd and 69 on August 23rd. There are 1,172 active cases in Alberta with 45 people being treated in hospital and nine in intensive care. Nearly 29,000 tests were processed over the weekend.

In the AHS Central zone, there are 26 active cases with two people in hospital. There have been 536 recovered cases in the zone and seven deaths.