One COVID-19 case active in the County of Vermilion River 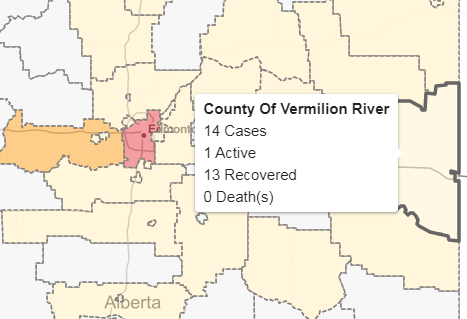 One case of COVID-19 in the County of Vermilion River has been relisted as active, according to Alberta Health data. In the September 4th update, all 14 cases were considered to be recovered, but the county is now showing one active case and 13 recoveries.

The M.D. of Wainwright continues to show one active case, 58 recoveries and two deaths, as of September 7th.

Another five COVID-19 related deaths were confirmed, two of them were from the Good Samaritan Society Southgate Care Centre in Edmonton. There has been 247 deaths in Alberta. There are 1,692 active cases in the province with 45 people being treated in hospital and ten of those in the ICU.