COVID-19 numbers have stayed the same in the North-West region since Sunday, with seven more cases being confirmed in the last day across the province.

According to the Saskatchewan Government’s September 8th update, cases remain at five active and confirmed in the area containing Lloydminster, The Battlefords and other surrounding towns.

Breaking down the locations of the new cases, there are three in Regina, two in the North Central area, one in Saskatoon and one in the South Central health region. One person remains in hospital, in intensive care in Saskatoon.

Of 1,669 reported cases since the pandemic began, 58 are considered active.  A total of 1,587 people have recovered. 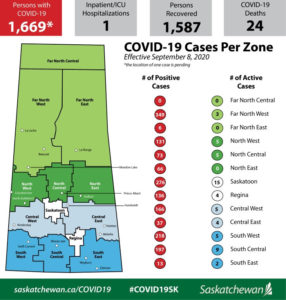