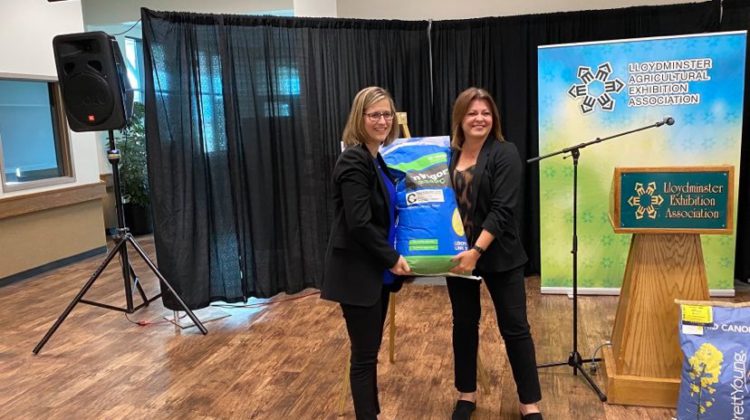 Since the pandemic began closing large scale gatherings back in March, the Lloydminster Exhibition Association says they’ve seen a 90 per cent decrease in special event bookings and rentals. The event also either put on hold or scaled back major fundraising events like the Spring Showcase, Colonial Days Fair and the CPCA Chuckwagon Finals.

The Exh says many local farmers and agriculture producers have been asking for a way to help, which has led to the Lloydminster and District Co-op creating the Rooted in Our Community initiative. For every bag of canola seed sold at any Lloydminster Co-op Agro Centre, $5 will be given to the Lloyd Exh.

Lloyd Co-op CEO Leanne Hawes explains that one of their principles is caring for the community, and by doing it this way it provides them with a way to quickly provide some assistance to a critical community organization.

“The urgency to help them is now, it’s canola season right now. What we’d like to do is get some cash back in the hands of Lloydminster Exh, certainly to secure their future, and we knew we could do this with this promotion by the end of October.”

In a normal year, the Lloydminster Exhibition says they would hold over 900 events, drawing 200,000 visitors and a spinoff of $47 Million back into the local economy.  In order to continue paying the bills on their facilities and their 25 full time and 180 part-time employees, the Lloyd Exh has had to dip into their financial reserves.

Lloyd Exh General Manager Jenelle Saskiw says fixed costs are running over $100,000, and this initiative will help them weather the storm, and in turn, make it so they can continue to help community themselves.

“The Lloyd Exh has been in operations for over 113 years and has really been a pillar in our community. We’re not just about a cattle sale, we have so many events and so many organizations that we partner with and they are as dependent on us to use our facilities as we are to generate revenue.”

Saskiw adds that Rooted in Our Community showcases the farming and agricultural standard of “neighbours helping neighbours.”

The goal of the promotion is to raise $30,000 for the Agriculture Association and will run until October 30th, 2020. People can pre-book the bags of canola seed for the Spring of 2021 at any of the four Lloyd C0-op owned Argo Centres, two in Lloydminster, one in Lashburn and one in Neilburg.

Correction: This article has been updated to reflect that the bags of canola being paid for are pre-booked for 2021. We apologize for the error.