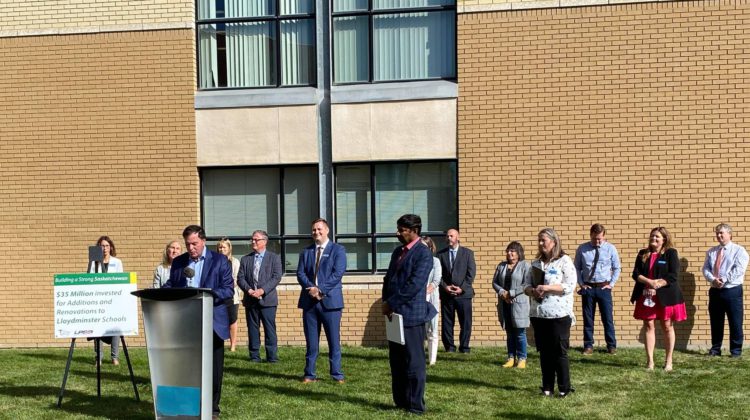 Holy Rosary High School is getting $10 Million in funding towards expansions on campus.

The announcement was made September 24th at the high school, with several school board members, both Lloydminster MLAs, and several others involved with the project.

The construction will add second-story space to the school, increasing Holy Rosary’s classrooms by sixteen. This, the board says, will allow them to meet demand, as the school’s population has grown beyond its capacity.

After construction is completed, the school will be able to hold around 1,200 students, up from the original 750. Updates are coming for mechanical and electrical systems, and places like the Commons area and Practical and Applied Arts will also be expanded upon.

LCSD Board Chair Paula Scott says they’re thankful for the funding and what it means for the school and have big dreams for the PAA area.

“We might look at maybe some automotive things, or electrical stuff, so more of the trades are possibilities. We’re in the dreaming phase, and the possibilities are endless.”

Minister Wyant adds that 11 other schools getting renovated or rebuilt across the province, and this work will have important impacts on both students and the community.

“It’s going to create the educational space for children to get the best possible education that they can, and that’s why this investment, not just in this school but other schools across the province, is so important.”

The project was announced along with renovations for Lloydminster Comprehensive High School, which will get $25 Million. These costs will be shared between both Alberta and Saskatchewan under the Lloydminster Charter. Alberta will pay 58 per cent of the costs, which is based on the number of students per province at the school.

Minister of Infrastructure Prasad Panda explains the Alberta Government hopes this funding boost will help the area recover from things like the economic slump and COVID-19, along with giving needed upgrades to education in the community.

“Special circumstances like this requires an appropriate response from the Government to stimulate the economy, to grow the economy. So we are building infrastructure to diversify our economy and create local jobs.”

The work also comes as part of the Saskatchewan Government’s $7.5 Billion capital infrastructure plan and the Alberta Government’s  $10 billion COVID-19 recovery plan. For work on both schools, the government expects 110 jobs to the community.

Construction is expected to be completed at HRHS in 2022, with the LCHS being done in 2023.