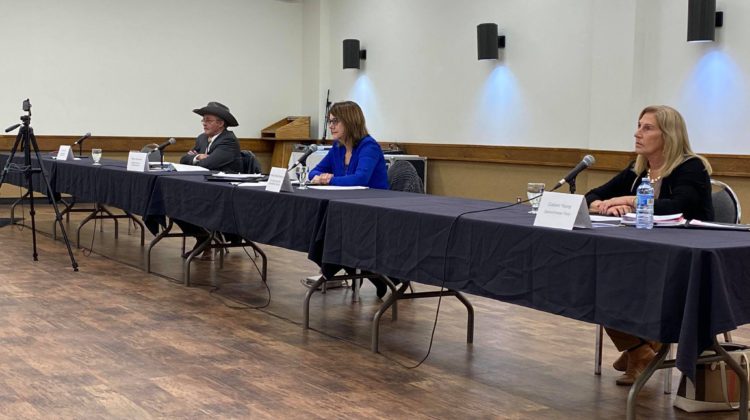 provincial candidates speak on their platforms at the Virtual all candidates debate. [Dan Soul/106.1 The Goat]

Candidates vying to be Lloydminster’s next MLA in the Saskatchewan Legislature got to have a chance to share their views with the public, despite having to work around the COVID-19 guidelines.

Colleen Young of the incumbent Saskatchewan Party, Colleen Morrell-Henning with the Saskatchewan NDP and Steve Gessner of the Buffalo Party were all in attendance of the first Lloydminster Chamber of Commerce “Virtual All Candidates Forum.” Residents emailed their questions in.

While candidates expressed that not being able to talk face to face with residents and perhaps to a limited internet viewing audience was a challenge, they still all believe they were able to get some points across to voters. Topics ranged from the economy and healthcare to policing and internet infrastructure as people emailed their questions into the Livestream.

Young, who is looking for her second term as Lloydminster’s representative, put her party’s record on display in the debate. She pointed to things like the Saskatchewan Party adding $2 Billion to their capital infrastructure plan in order to rebuild jobs and grow the economy post-COVID-19. She adds that prior to COVID-19, some resources did drop, her party is working hard to get pipeline projects running,  expand global trade markets and diversifying into new electrical resources like small nuclear power reactors, solar power and wind in the province.

She also touched on money being invested in schools across the province, promoting financial literacy and the Sask Party’s work to enhance funding for healthcare and mental health programs, and working on with indigenous partners on several social and economic projects, supporting them for schooling and making jobs and training available to first nations communities.

Young says she hopes the Sask Party’s record came across during the debate, but also that residents take away enough to make an informed decision.

“The Saskatchewan Party has a proven track record of investing in people, supporting people and making life more affordable in this province, and I think that’s the most important part of this, and the fact that I myself have been a strong leader and advocate for my constituents here in Lloydminster.”

Young also noted that her government had put in work to bring 5G capabilities to various areas of the province facing challenges with their cell or internet service.

Henning looked to clear up misconceptions about NDP during the debate, announces several party platforms for the area

During her time in the debate, Henning spoke on many things, such as calling for enhanced internet and cell phone services in rural areas as an economic, health and safety issue, enhanced mental health, hospital and addictions services, removing PST on construction jobs, implementing a “Saskatchewan First” policy for bids on constructions in the province, and having strong education and home care system in the province.

Henning also touched on the possibility, if elected, that an elected NDP Government would look into wind, solar and geothermal ways of producing power, hoping to make SaskPower a leader in geothermal production. She also called on Saskatchewan to diversify trade partners as well.

The debate got tense between Henning and Young on the subjects of pipelines and the oil industry. Young made the accusation that the NDP was lying about their status on the oil and gas industry, and would kill pipeline projects and noted that NDP leader Ryan Melli had spoken at anti-pipeline rallies. Henning fired back that people could find the NDP’s true policy, being pro-pipeline, in writing as part of their party policies.

By the end of the debate, Henning explains that she hopes it cleared up some misconceptions about the NDP, that they not just a party for urban ridings, and they have what it takes to advocate and lead in rural areas as well.

“Many of the sitting NDP MLAs, and our leader, actually came from farms. They grew up on farms. We all, [or] almost all of us, have connections to rural areas like Lloydminster.”

Also during the debate, Henning said she would be taking a listening first approach to First Nations economic vision so that she could respect their ideas for government procurement projects.

Steve Gessner says he wanted to use the debate to get the word out about the Buffalo Party of Saskatchewan, and the possibilities they present as a third option this election. Gessner spent some time talking about their plan to push for the abolishment of the National Transfer Payment program, or if the system could not be scrapped to make it equal for all provinces.

He also called on Saskatchewan to become a major player in all forms of energy, but expressed concerns about wind power not being ready, claiming that US states like Iowa had no way of dealing with aged out infrastructure for wind towers aside from “burying the equipment in the ground.” He added that solar, without government rebates, is not feasible either.

He also noted that while Saskatchewan is a trade-dependant province, they should move into other exports. In addition to raw materials, he said the province should move finished product. He says the Buffalo Party would look at incremental tax breaks for businesses as well.

Gessner says the COVID-19 pandemic has put challenges on the party, which was only established June of 2020. because he cannot go door to door to get his name out there.

” We have seventeen candidates in this province, we have real candidates, they’re not just paper candidates. The process that they put me through just to put me here is very very intense. They did not just want people to fill the hole. They want people here who can do this.”

Gessner also said he would like to get schools back to fundamentals like reading, writing and mathematics as the core parts of education. He also did not announce a plan for rural internet infrastructure, claiming to not have as much of an understanding of it.

Lloydminster’s voters will decide between Gessner, Henning and Young on October 26th. There is also a Saskatchewan Green Party candidate for Lloydminster, Audra Kish, who was not in attendance.

In the meantime, voters can stream the entire debate online on the Maz Entertainment Youtube Channel.