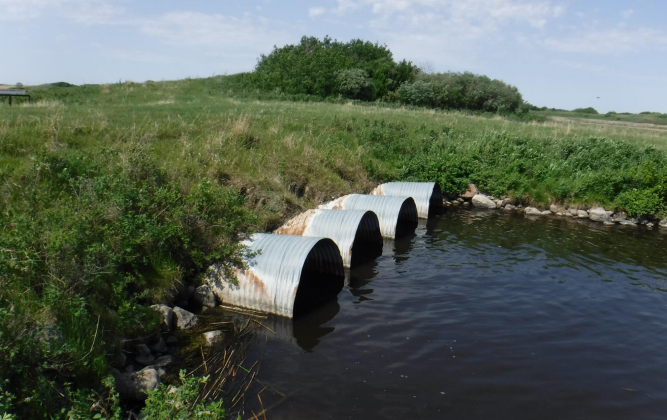 Two projects focused on improving the city’s water infrastructure are moving on to the next step.

City council approved the design and construction of the third phase of the Northwest Drainage Channel following a grant approval by the Alberta Government.

The project will upgrade the channel between the Husky Lloydminster Refinery and the 67th Street culvert crossing east of 50th Avenue. Phase three plans encompasses culvert installation and regrading in between 57th Street and the CN Rail tracks.

Mayor Gerald Aalbers says this particular portion of the project will require communication and cooperation between the City, CN Rail and Husky Energy in order to move smoothly.

“There’s a lot of steps we have to go through and we want to make sure we can deliver on time for 2022. I appreciate administration bringing it forward at this time to ensure that city staff can work with partners to ensure that everyone is in agreement. Husky has interest in the ground and we want to make sure they’re protected and they have certain so we just need to work through those with them.”

The total cost for phase three is about $1.8 million and the provincial grant would be covering $1.6 million of the costs. Phase one of the project was completed in 2019 while phase two is currently underway and is expected to be done by the end of the year. Construction on phase three is scheduled to start in fall 2021.

Upgrades to the channel will ensure the city be handle storm water and prevent flooding from any major weather event in the future.

City administration will also be applying for another grant to cover the upgrades to the water treatment plant. The Alberta Water/Wastewater Partnership is a cost sharing program which provides funding based on population.

Under the partnership, 25 per cent of the cost to upgrade the Supervisory Control and Data Acquisition system and the chemical feeder system would be covered. The total cost for the upgrades is $1.917 million and the city would be eligible for about $ 486,000 for the projects.

“This will give us the opportunity for those upgrades to be funded and we’ll take every opportunity, through administration, that we can find for grant monies to lessen the pain on the taxpayer. The water system is our system at the end of the day and if there is grant money then that’s what we’re going after to help cover the costs.”

City staff noted the upgrades were listed as a high priority in the 2021 draft budget and are likely to brought forward in the next budget. They have been previously listed in budgets since 2018, but were deferred.

Upgrades to the systems are expected to improve reliability of the water treatment plant, reduce maintenance requirements and increase the chemical consumption efficiency.

The City is already receiving funding through the grant program, but under the wastewater treatment category. City staff expect an answer from the government sometime in March to May 2021.