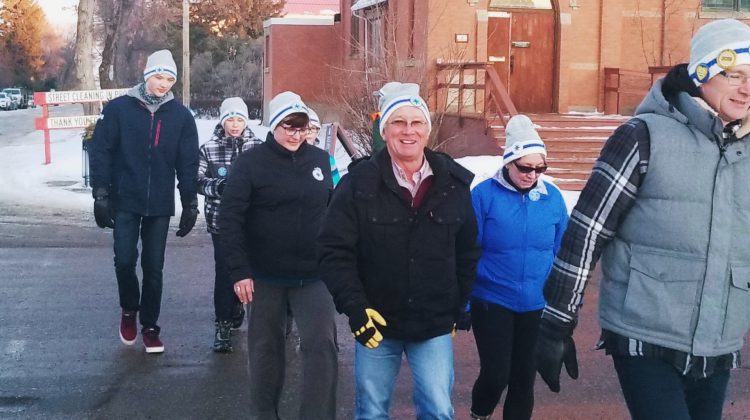 The route took walkers by the drop-in centre for Coldest Night of the Year with the options of stopping by to learn more about it. (Photo submitted by: Nikita Ganovicheff, mylloydminsternow.com)

While the Coldest Night of the Year wasn’t as visible on Lloydminster streets this year, residents continue to support the message behind the event.

Lloydminster Men’s Shelter Executive Director Valerie Lazicki says despite not being able to gather in 2021, residents still went out for walks on their own to show their support for the organization.

“Our event was virtual this year which was a different way of holding our Coldest Night of the Year but our supporters were fantastic. We’ve exceeded our goal which we’re very happy about.”

Groups decided what time and when they wanted to walk with some deciding to get out during the extremely cold period last month. At time of writing, over $25,000 has been donated to the fundraiser exceeding the $20,000 goal. Lazicki says the money will go towards keeping the Men’s Shelter and the Drop-in Centre running and ensure the city’s less fortunate are being taken care of, especially during a very difficult year.

“This winter we went 24/7 at both locations so as you can imagine that means an increase in costs. This money will be well used to provide essential services, food, shelter, clothing and everything a person needs for the bare basics.”

According to the donation page, 13 groups registered for this year’s event. Residents may recognize some of the group names such as the Grace United Walkers and LSAS as they are dedicated participants who take part in the event every year.

“We are so grateful to the same people who look forward to Coldest Night every year to support the work we do and our organization. They come back every year. They’re so strong and dedicated. I don’t know what we would do without them. I’m so grateful to everyone.”

Residents can continue donating to the cause until the end of March. Lazicki thanks everyone who donated or participated in this year’s event and looks forward to the next Coldest Night of the Year which she hopes people can attend in person.