LPSD staff promoting wellness while cycling for a cause 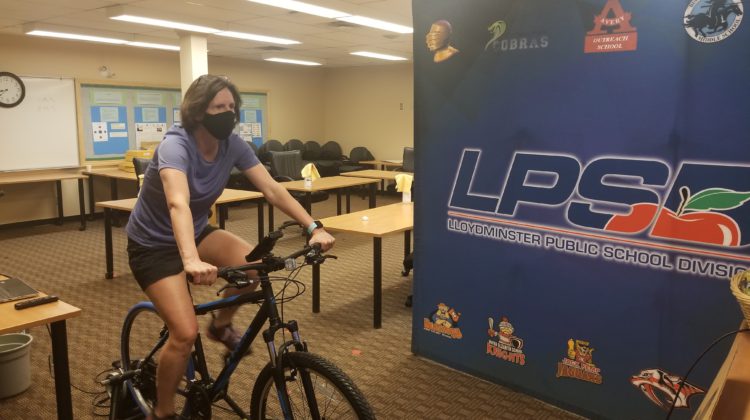 Shelley Merth and other LPSD staff are pedalling with a purpose this month. (Nikita Ganovicheff, mylloydminsternow.com)

Lloydminster Public School Division staff and students are getting back on the bike in support of health and wellness.

For the next two weeks, staff at the LPSD administration office will be putting up some virtual kilometres using an indoor cycling machine as part of their “Pedal for a Purpose” program. The program not only helps promote physical wellness in the staff, but the division will also be taking in monetary and food donations which will go towards LPSD families in need.

“We have two bikes and two smart trainers from a Jumpstart grant that we received in the fall,” says Educational Technology Consultant Shelley Merth. “These bikes are scheduled to go into middle schools for an indoor cycling league, but because of COVID we can’t have the bikes in schools. We’re going to put them into good use here until we can put them into the schools.”

While the bikes stay in place, a video game program called Zwift tracks their virtual trek and simulates portions like hills through the trainers.

“As you go up the hills, the resistance changes so in a 15 minute workout you can get quite a sweat going. I think people were surprised at how hard it could be, but they’ve signed up for multiple rides which makes me think they want to do it again. It’s good timing in spring as we get ready to go outdoors to cycle with our families.”

Merth says LPSD staff were able to ride over 100 kilometers in their first day. She adds they originally were aiming to ride the distance between Lloydminster and Edmonton, but that has since changed to riding across the province.

Another cycling trainer is in place at Queen Elizabeth School for some of the students to ride as well. It was made possible through a donation from Synergy Credit Union. The program was introduced to the division around this time last year, but was interrupted due to the pandemic.

“We had just started ‘Pedal for a Purpose’ at Rendall Park. We got to day six and the physical schools had to shut down so we had to put our charity relay on hold. I’m super happy to have it back and we hope to have them in the schools again this fall.”