The Vermilion RCMP is asking for the public’s information after someone caused major damages at the Clandonald Catholic Cemetery.

Officers received a call on May 25th, stating that sometime that week, between the 21st and 25th, several tombstones had been damaged. In total, 39 of the headstones had been pushed over, with several others having been damaged as well.

Some of these stones belong to people who no longer have any living relatives, meaning that their stones would have to be repaired with donations that are sometimes received by the cemetery, the RCMP notes.

The RCMP is currently looking for suspects and information. If anyone has any details, their asked to contact their local detachment or CrimeStoppers to remain anonymous. 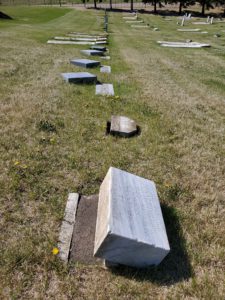