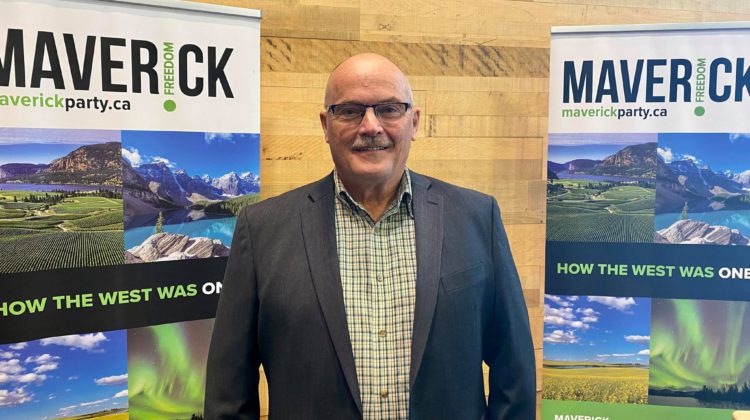 Fred Sirrett is running to be the MP for Lakeland, under the Maverick Party banner. [Dan Soul/106.1 The Goat]

Voters in the Lakeland riding have a Maverick Party candidate running to be their MP in this election, as Fred Sirrett joins the federal race.

Sirrett announced his candidacy at Rec-Tech Thursday, at a press conference alongside Battlefords-Lloydminster Maverick hopeful Ken Rutherford and former Vergreville-Wainwright MP Leon Benoit, who has been working with the Maverick Party in the area.

Sirrett has been in the community for his entire life, working in the agriculture sector, the oil and gas industry with his sons’ business, and spending 33 years as a Pastor around this area.

He says he joined the race after feeling politically alienated from the existing federal parties, and finding that the Maverick Party’s mantra of working in the interest of Western Canada appealed to him, something he notes he’s seen from talking with people in the Lakeland already.

“Now [that] there’s just such a groundswell of support, I think that the Maverick [Party] is a very viable, effective alternative for Western Canadians to turn to in this time.”

The Maverick Party is new on the political scene this election, having only been established this year. Its goal, according to its literature, is to restructure Parliament to create more of a balance between East and West Canada.

They also look, according to their information, to vote for, introduce and support bills that are in the interest of BC, Alberta, Saskatchewan and Manitoba. As such, they add, the 27 running candidates under their banner will only be in these provinces, as will all future candidates in other ridings.

Sirrett explains that he’s heard discontent about the economic state around the area, especially in the oil and gas industry, and concerns of issues with pipeline projects getting completed in Canada. He cites TransMountain, Keystone and Energy East as examples.

“[In] my sons’ company, I think there were 121 men who worked there at one time, and now it’s gelled down to 40. So they have to say goodbye to young families that are having babies, and that’s a tough thing. So what I would like to say about it is while those are policies and there are hundreds of policies like that, the impact upon families and people of the West is profound.”

He adds that he would also be looking at agriculture trade for ways to protect Western Canadian interests for these products.

Sirrett will be hitting the campaign trail alongside incumbent Conservative MP Shannon Stubbs, Liberal candidate John Turvey the NDP’s Desiree Bissonette and Ann McCormack of the People’s Party of Canada, who have all joined the race to be Lakeland MP.

The Green Party have yet to name candidates in this riding, with the cutoff date being September 1st.