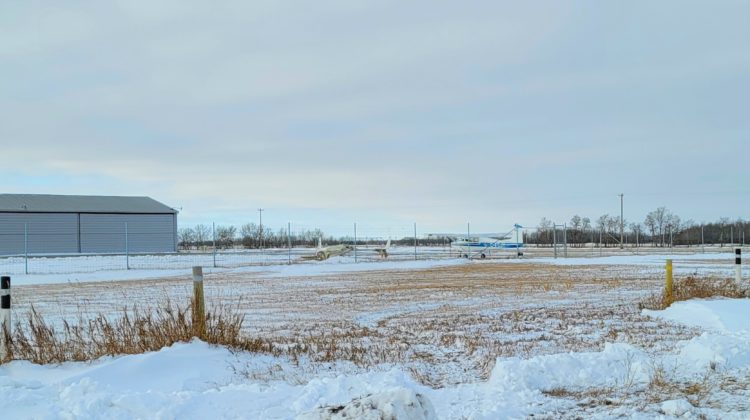 “Our airport is actually working really well. It’s probably one of the better airports that I go to. And the uses that are happening at the airport are normal.”

Contract pilot Mark Sampson flies for a living. It has been his job for over a decade. He learned to fly in Lloydminster 17 years ago. He says the runway at the Lloydminster Airport is well taken care of and always clear. There is a great network of support. But airplane owners are taking issue with proposed changes that are being discussed at Council.

One of the discussions before Council is the use of hangar space. The matter came up as the Airport Hangar group presented at Council on hangar lease negotiations and land use at the airport.

The proposal calls for 75 per cent of hangar space to be dedicated to aviation. Sampson pointed out that the hangar has a lot of unused space after a pilot parks the plane. Sampson supports a mixed space use of the hangars at the airport.

“Most aircraft owners I know, they start with their small plane. They look at the hangar and they say the hangar is really expensive to buy, but if I can park my skidoos and I can park my boat and I can park my classic car in there at the same time with that excess space, I can justify this purchase. I don’t need to self-storage elsewhere.”

The owners also want consideration for residential use of hangars. Sampson says when he learned to fly, his instructors lived at the airport as those were entry level jobs. It was cheap and they could walk to work. He sees that as a benefit of a good airport to have mixed usage.

Added to mixed usage, Sampson wants to see less restrictions as he references the accomodation of the RCMP helicopters in Edmonton.

“They have a requirement to have their pilots, their two pilots on staff all the time at the hangar and all the crime happens at night, so they actually have a two-bedroom apartment combination built right into the hangar. The guys spend the night.”

He notes the hangar accommodates the RCMP aircraft as well as other clients who park their planes there.

He continues that just before COVID, the local flight school was awarded the air cadet training program. It would have allowed kids from across the prairies to come to Lloydminster to learn how to fly.

“Those contracts prefer that those students are housed right at the airport so they can walk to their lessons. It saves on transportation costs and logistics. That particular business applied to have accommodations set up at the airport and they were denied because of the land use we have now.”

Sampson wants that opened up. He says when he goes for higher training, he typically stays right at the airport for the same reason.

He switches to the land use policy and again he wants the City not to make it restrictive.

“The land uses need to be flexible to help it [the airport] grow and help people come in and invest in this community. In regards to lease agreements, the hangar owners just want to be treated fairly and equitably. For a lot of these hangar owners that’s there major investment. Aviation is really an expense. It’s outside of their business. It’s outside of their revenue models.”

Sampson says with regard to revenue generation, the City is paid per-flight or per-person for departing and returning passengers. He feels Lloydminster could look at niche markets.

“If we become a destination in Lloydminster, for example the hunting tours that are coming up from the United States. Those guys are coming to Lloydminster. They’re using our terminal. They’re buying our jet fuel and supporting our local economy. Going on a local hunting tour and bringing thousands of dollars. Tens of thousands of dollars and flexing it into the local economy. If we are going to talk economic growth for the airport, why not cater to those guys. I would rather focus on the twenty thousand dollar a week people, coming to influx our community, than the tens or twenty dollars in airport fees.”

There was a healthy turnout at Council representing the hangar owners group. Council granted a public hearing on the text amendment to Land Use Bylaw 5-2016 to held December 13th at 2 p.m., when the discussions will continue.