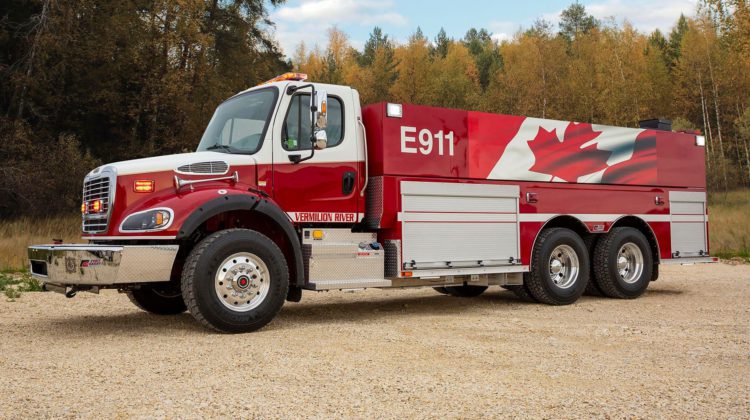 County of Vermilion River Fire Chief Kirk Hughes is cautioning area drivers who use the Lea Park bridge along Highway 897 north of Marwayne. This follows a collision at the bridge on Wednesday afternoon.

On December 1st, RCMP, EMS and Fire crews were called to the scene where the police report indicated a maintenance vehicle was struck from behind by a semi. The resulting collision caused the highway to be closed off  for several hours as crews led the clean up and investigation.

Hughes in describing the situation, confirmed the police report.

“They were working on part of the bridge or before the bridge and a transport truck carrying crude oil and fully loaded was coming down that hill. I don’t know the circumstances of what transpired that caused the incident. That’s probably something the RCMP will determine with their investigation. But we do know that the transport truck struck the service vehicle pushing it about 300 feet into one of the bridge pillars and on to the side.”

Hughes said they had to rescue two men from the vehicle through the driver’s side, as the passenger side could not be accessed.

Hughes reflected further that the cargo on the semi stayed intact.

“We are thankful that the crude oil tanker was not breached in anyway. There was no crude oil going into the river, which would be an environmental disaster. Thankfully that was not breached. That was a good sign.”

Hughes says drivers approaching the bridge need to stay aware of the surroundings.

“The Lea Park bridge does narrow. That’s not a secret. Coming across that bridge especially in the winter time, you’ve always got to look for blowing snow or any kind of moisture collection that would make it slippery. It’s not uncommon for wildlife to utilize that bridge to transverse the river. So there are times you have to be careful; deer or other wildlife that might be on that bridge and there is nowhere for them to go. There is no where for you to go. There is no shoulder.

RCMP indicate the investigation in to Wednesday’s collision is still ongoing.