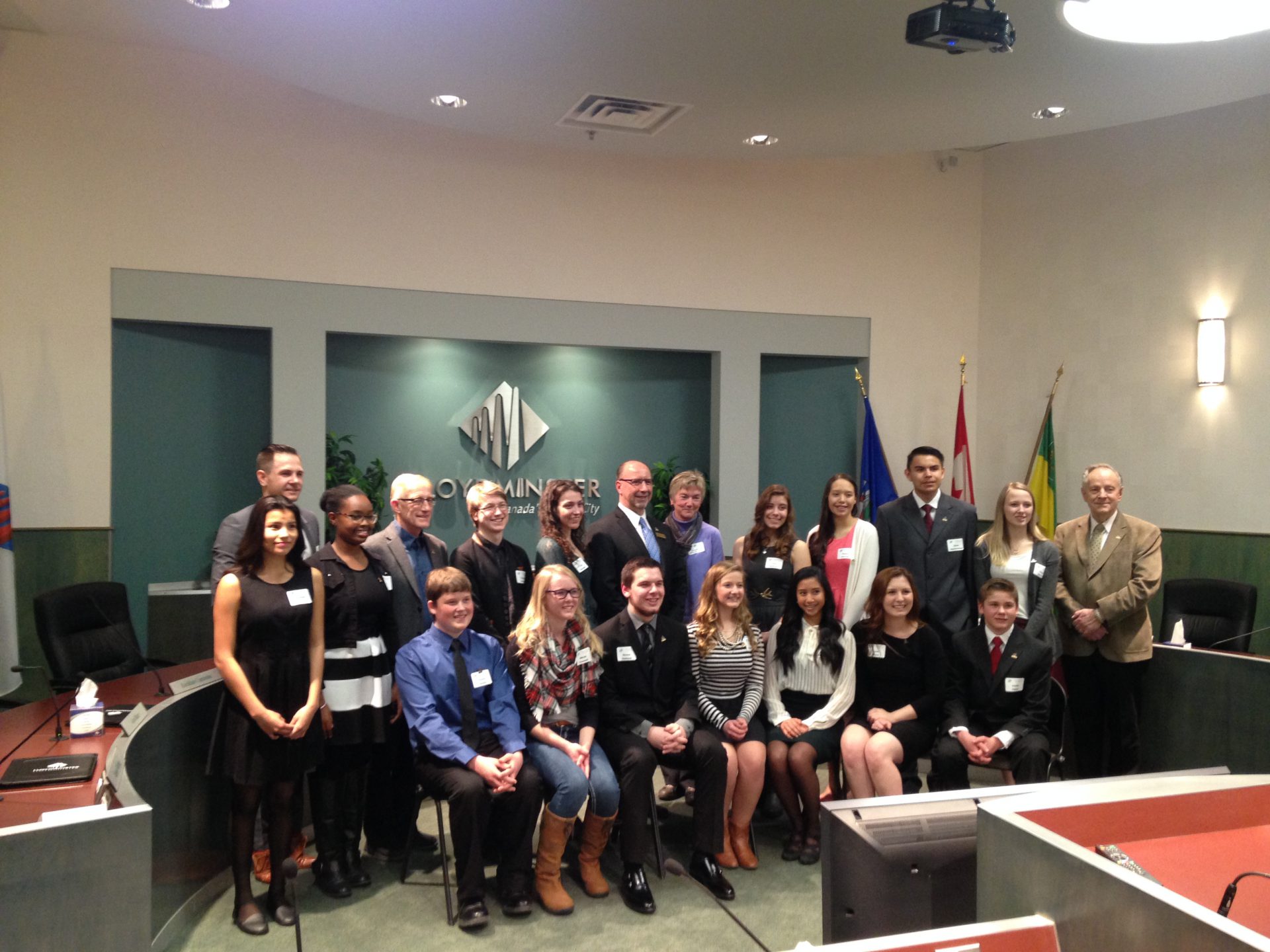 On Monday, March 14th, 15 Lloydminster adolescents, ranging in age groups from grade 9 to 12, were sworn-in. There was a ceremony held at Lloydminster City Hall in the Council Chambers, where the 15 bright young people made their pledges to serve their community, to the best of their abilities, so help them, God.

Many local dignitaries attended the event and several addressed the Youth Council members, including His Worship, Mayor Rob Saunders, Sask Party candidate, Colleen Young, and Councilor Jason Whiting, who was at the forefront in bringing together the Youth Council in Lloydminster. RCMP Constable Grant Kirzinger also attended and led in the singing of ‘O Canada’ before the ceremony, and during the proceedings, Councillor Linnea Goodhand led in the swearing-in of each of the youngsters.

One of the key collaborators in putting together the Youth Council, Councilor Jason Whiting said it has been a longtime coming.

“I would say it probably took about a year from first conversations to where we are here today. A lot of discussions, a lot of planning has gone into this, and certainly, not solely by me, but by a lot of the other Steering Committee members. A lot of time and a lot of commitment that has gone into creating this Youth Council, and I’m glad to finally see it come forward, and be official, and show off our Youth Council to the rest of our community,” said Whiting cheerfully.

Whiting also explained how the young council members were selected. The Steering Committee appealed to the public for nominations of youth members of the community, or young people could nominate themselves or their peers. Fifteen nominees came out of it, a submission number that the Committee was very pleased with for its very first run through, and those 15 applicants were all accepted and sworn-in, some with specific titles.

These young individuals will be tasked with being the voices for the young people in the community and their peers, for any audience, organization, or level of government they see fit.

“They’ll be responsible for bringing their voices from their peers to the community. Not just to City Council, but also to other members of the community, to the school divisions, and anywhere else that they think that they need their voices to be heard, even provincial, or federal. You know, dream big. The one thing about this organization is that it’s starting from scratch… Ideally, yes, I would love to see them come to Council at some points throughout the year and provide feedback and input in to us, but it’s going to be up to them how they want to do that. We’re letting them drive this completely. We’ve provided the opportunity, now it’s going to be up to them to follow through with how they want to operate this group,” explained Whiting.

The group essentially has no set guidelines to follow as of yet, or mission put in place. At this point, the role of the Youth Council is very open-ended and the young members are able to use their discretion with regards to actions they may take.

“We’re right at the beginning so we don’t have any plans fully in place. We have a few ideas as to what we might want to do. Really, it’s just to engage the unengaged,” says Tori Baynton, Youth Council Chair.

Baynton is a grade 12 student at Lloydminster Comprehensive High School. She was thrilled to not only be a part of the new council, but to be named Chair, which she said she was nominated for by her fellow participants, and voted in via secret ballot. She also addressed the attendees of the ceremony after the swearing-in of all 15 members took place.

“It means a great deal. It’s such an honour to be able to come and represent Lloyd and to represent the youth of Lloyd… to be able to, I guess, help and create, just a better environment for everyone, and to do my part,” Baynton said excitedly.