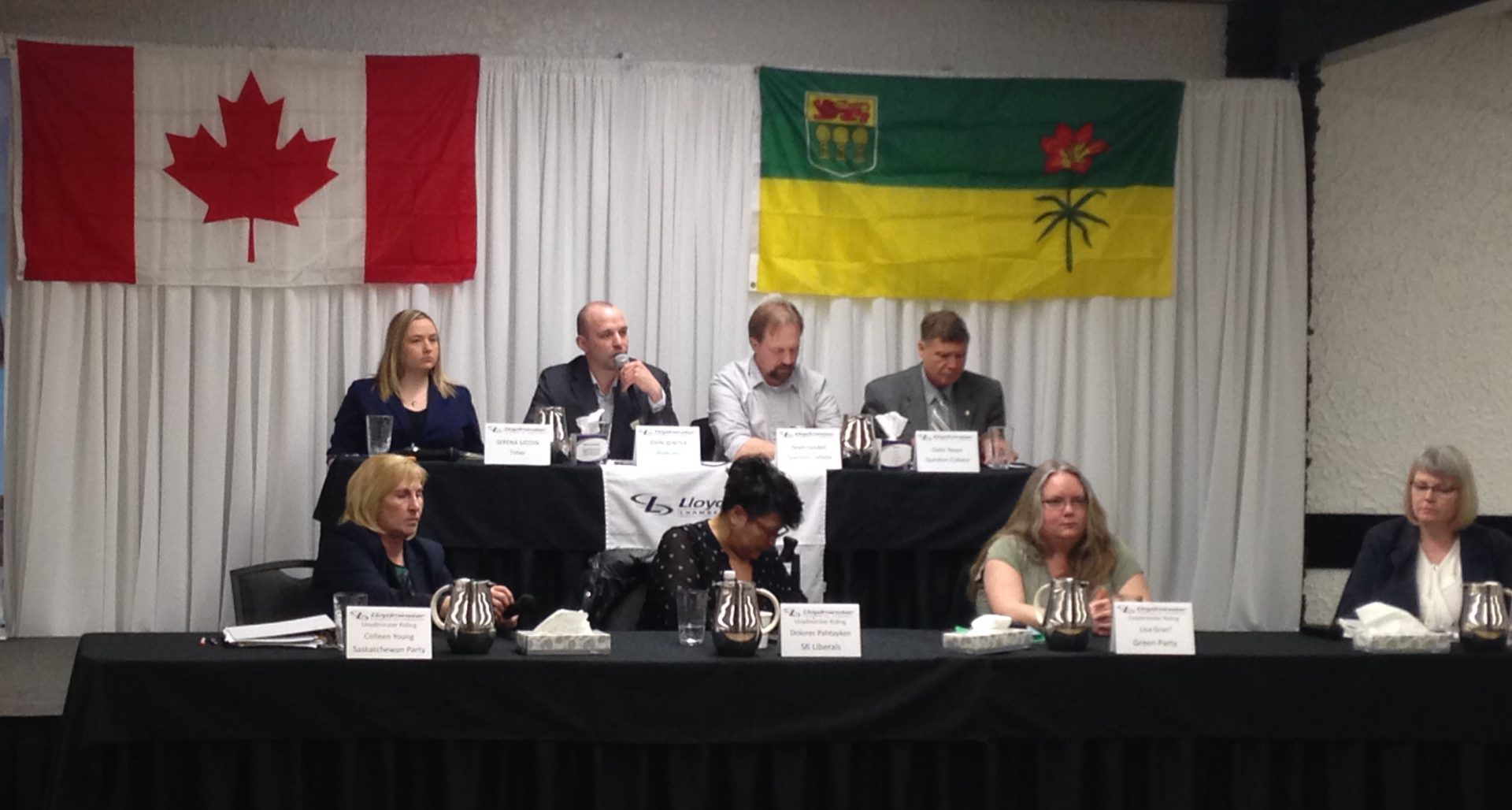 The Lloydminster Chamber of Commerce has held an all candidates forum for the Lloydminster constituency in the upcoming Saskatchewan provincial election.

The event took place at the civic centre, Monday, March 21st at the same time the Lloydminster Bobcats were playing game 3 of their playoff series against Whitecourt in the arena below. All 4 candidates running for the riding attended and answered numerous questions for a crowd filling far less than half the seats provided.

“Well with the weather the way it was and the hockey game that’s on below, I think it was to be expected that we don’t have that many people here this evening… In the by-election, it was quite cold and blustery too, if I remember correctly, that evening,” said Sask Party candidate, Colleen Young regarding the poor turnout.

During the forum, she also spoke a lot about the population growth in Saskatchewan over the past 10 years under the Sask Party and the province’s having the lowest national unemployment rate. Despite the low turnout, NDP candidate, Michelle Oleksyn, said that it went well and she felt she was speaking to a group that was invested.

“I know that the people that were here are genuinely concerned about what’s going on in our province. And I feel that I did a good job in presenting our message, which is prioritizing the people of our province,” said Oleksyn.

All candidates said they were pleased with how the forum went and felt fairly confident in their responses.

“I think it was a pretty interesting evening. It’s great to see four women candidates up there, for starters, and to hear the different perspectives from all the different parties on their platforms. Some of them… I mean, I didn’t hear the NDP costing out any of their platform, even though they’ve made lots of promises. But it’s great to have this kind of debate in our constituency,” said Young.

Taking note of all candidates in the running being female was not lost on Liberal candidate, Dolores Pahtayken, especially.

“It’s very empowering; it’s a sign of the times; it’s a sign of equality. You know, being a woman, if you revert back to nature, you would never ever mess with a mama bear. Never. You know that, and women have that quality. We’re a little more resilient. We know our priorities and priorities are always to our grassroots people, to our families, and creating a better community, and essentially a better world for our kids to grow up in,” said Pahtayken.

During the forum, the NDP received a lot of flack from the Sask Party candidate Colleen Young often recalled decisions and situations, spending and deficits that occurred during the NDP’s years in power in Saskatchewan.

Oleksyn was not without a response to those comments: “I think we all have to move forward and look forward, and I don’t believe the NDP has ever been a ‘look-back’ party. We’ve always been forward. And I mean, if we want to go back, we can always go back to Grant Devine years, and we can always look back and see the errors of past governments. But I believe that by looking forward, and with our young leader with a young family, Cam Broten, has what it takes to take us forward.”

Oleksyn also said the Sask Party, in many ways, squandered the province’s wealth.

Green Party candidate, Lisa Grant, commented about the butting heads of the NDP candidate and the Sask Party candidate in her closing statement at the forum. Grant wanted to emphasize that despite the traditional make-up of government having the primary party and the opposition, there are more than just 2 parties to represent voters.

“Most governments seem to end up with a powerhouse and it’s the result of our electoral system. It’s hard to do that fight. It’s just a case of getting out there and talking to people. Some of my colleagues in the party, they’ve been door-knocking for 2 years now, just getting out and talking to people and finding out what people want, and convincing them that we are a viable alternative,” said Grant.

She initially got involved in politics following an election where she didn’t feel confident in any of the candidates and in hindsight realized she could have tossed her name in the mix, so that she and other people, feeling as she had, would have someone to vote.

Grant and Oleksyn weren’t the only ones to make comments with regards to statements from the Sask Party candidate. Pahtayken seemed shocked by one of Colleen Young’s claims.

“The Sask Party, they talked about the level of education, and talked about how much they’ve invested to our education as First Nations… we’re federally funded. So I’m not sure where that statement came from,” said Pahtayken.