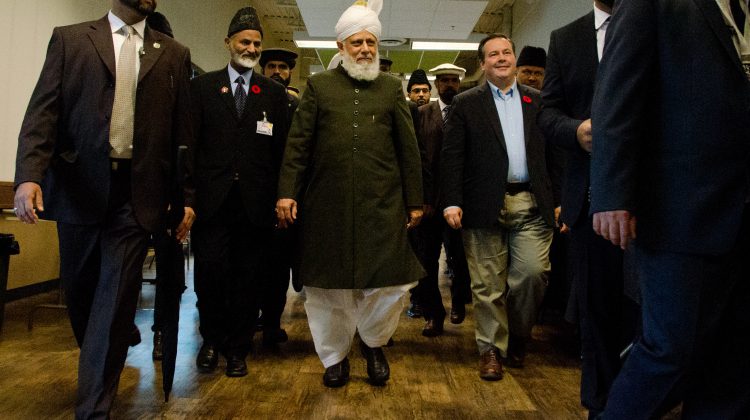 The Border City had an important visitor over the weekend.

His Holiness Mirza Masroor Ahmad, the worldwide head of the Ahmadiyya Muslim Community, came to Lloydminster as part of his Canadian tour, which started in Ontario and will end in Calgary. The caliph was travelling through the prairies as part of the tour, with stops in both Saskatoon and Regina to inaugurate mosques in those cities.

His stop in Lloydminster was for the same reason. He visited and inaugurated the newly-renovated Baitul Aman Mosque on Saturday evening, after his convoy pulled into the city, escorted by police.

After carrying out the ceremony, the caliph made a second appearance at the Lloydminster Exhibition Grounds on Sunday morning, addressing the attendees of an inauguration reception. Prior to the address, he also met with local political leaders, with Lloydminster MLA Colleen Young and mayor-elect Gerald Aalbers sitting down with the caliph for a short discussion.

“It was an incredible experience,” said Aalbers.

“Certainly, I don’t think a lot of people realized the size of their faith community, so I think that was incredibly honoured for us, to host him here and have him at the exhibition grounds, and the reception room full of his supporters and people from the community. I think it was a great experience, and I hope we have the opportunity again to host another, in essence, a head of a world church.”

The event was the first time Aalbers officially represented the City of Lloydminster, though it was prior to swearing-in.

Ian Hamilton, the outgoing mayor of North Battleford, was also present in the meeting, as well as Saskatchewan radio host John Gormley and Progressive Conservative Party of Alberta leadership candidate Jason Kenney, who had previously met with the caliph in his role in the federal government.

After the caliph’s address, he sat down with the press to discuss the Lloydminster visit. During the course of that discussion, he indicated there was no reason for residents of Lloydminster to fear his religion. Hazrat Mirza Masroor Ahmad, the spiritual leader of the world’s Ahmadiyya Muslims, speaks during a press conference in Lloydminster on Sunday morning. Photo by James Wood/106.1 The Goat/Vista Radio

“I don’t think there should be any fear of Muslims, especially of Ahmadiyya Muslims,” said the caliph.

The caliph also discussed the growing Ahmadi community in Canada, and expressed happiness that the local chapter in Lloydminster was doing well.

“Wherever I go, when I see my communities progressing, and the members of my community are more close and attached to the community, and to the true teachings of Islam, then it makes me happy,” said the caliph.

“When I see the mosque is here now, we will have the opportunity to portray our true teachings to the surrounding neighborhood, our neighbours. I am very much satisfied and happy. I pray and wish that they prosper more than before.”

He additionally said that Lloydminster could the role model for harmonious living between different people.

“Lloydminster is the town, when it was founded, when it was established by the person, he says ‘here, apart from the white men, no other nation will come, to reside,’ but now, it has also become a multi-cultural, multi-ethnic, town,” said the caliph.

“So, we should live peacefully, harmoniously, in this town, and respect each other, so that this town becomes the role model of peace, harmony, and love.”

The caliph’s next and final stop on his tour will be Calgary.