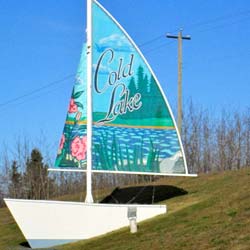 On Friday, the City of Cold Lake was notified without warning or consultation, that it would suffer a $10 million annual reduction to its budget as the Government of Alberta will no longer honour the intent behind the original Cold Lake Air Weapons Range Agreement.

“The City of Cold Lake brokered the original agreement for its sustainability and yet we were not given the benefit of any meaningful negotiations, consultation or forewarning that our taxpayers would be treated this way through a unilateral decision made by the Minister of Municipal Affairs,” Mayor Craig Copeland said.

“And yet, despite very strong and public promises from our neighbours that they were not seeking to take anything away from our municipality, this new arrangement has quickly been celebrated. I find it hard to believe how the City of Cold Lake – the largest urban center in the Lakeland, and the only one which continues to see growth in our region – can been treated with such disrespect.”

Although the original agreement outlined the need for collaboration between the City of Cold Lake and the Government of Alberta to transition all municipal revenue from the air weapons range to the city, the city was open for regional collaboration.

Early in 2016, the City of Cold Lake submitted a proposal for a new agreement to Alberta Municipal Affairs that would have respected the original intent of ensuring the city’s sustainability, while also bringing the Town of Bonnyville and the Village of Glendon additional revenue from the Cold Lake Air Weapons Range.

“In 2011, when we made the original agreement, we were well aware that we were dealing with property taxes and so the communities and industry most affected by the operations on the Cold Lake Air Weapons Range were all thoroughly consulted,” Copeland said.

“This time, we’ve been shut out of the process. Even though we have an MOU with the government that said we would collaborate on any changes to the agreement, we seem to be the only ones who were not at the table.”

No meaningful discussion, negotiations, or communication surrounding the City’s 2016 proposal took place. The original agreement, signed in September of 2011, was arrived at only after the City of Cold Lake endured a government-ordered municipal inspection. The inspection found that the City was well governed, but in need of additional revenue.

“We disagreed with the inspector’s recommendation that we needed to raise our taxes by over 20 per cent – we had done better than that prior to the inspection, and were still unsustainable,” Copeland said.

“If you look at the other municipalities in this new arrangement, they have not done the heavy lifting Cold Lake has. They have kept taxes low for their residents and looked to ride on our coattails and benefit from our hard work. This government seems to have negotiated only with our neighbors on the reworking of a deal intended to provide for the City’s sustainability.”

When Municipal Affairs notified the City of Cold Lake that the original agreement was being reconsidered, the City extended a number of invitations and requests for both former Minister of Municipal Affairs, Danielle Larivee, and the current Minister, Shaye Anderson, to visit the community. The intention was to have them learn about the original agreement, see why it was needed and what it helped accomplish. All of the city’s requests were denied by both ministers.

“Minister Anderson has boasted of visiting a large number of communities on a tour this past summer, but not once did he visit Cold Lake – the only community negatively impacted in his new arrangement – to see what the original agreement has meant for this city,” Copeland said.

Copeland added that Scott Cyr, MLA for the constituency of Bonnyville-Cold Lake, refused to answer any of the mayor’s emails or letters surrounding the Cold Lake Air Weapons Range Agreement, nor would he respond to repeated calls from mayor and council to state his position on the agreement publically.

“We are not 100 per cent sure where Mr. Cyr is on this new arrangement, but we know that he has not concerned himself with the City of Cold Lake’s sustainability,” Copeland said. “Spreading money around your constituency might seem politically expedient, but how can he defend this deal when it comes at the expense of our viability? We’re the only growing, urban municipality he is supposed to represent, and the only party to the original agreement that has been negatively impacted.”

The City of Cold Lake will be gathering all the information it needs so that it can consider all options as it moves forward in its work to arrive at a position of long-term sustainability.

“This new arrangement will, in part, take money from the City of Cold Lake to give to two of Alberta’s richest municipalities – municipalities whose property taxes, however, are among the lowest in the province,” Copeland said.

“Finally, instead of fulfilling the obligation for collaborative negotiations and communication in the original agreement, this government has deliberately blindsided us in the middle of our budget process with a decision we were not a party to making. It’s too early to be sure of what all of our options are, but I can promise the taxpayers of Cold Lake that each available option will be thoroughly examined, and that our council will fight to regain a position of sustainability. We will hold people to their promises.”