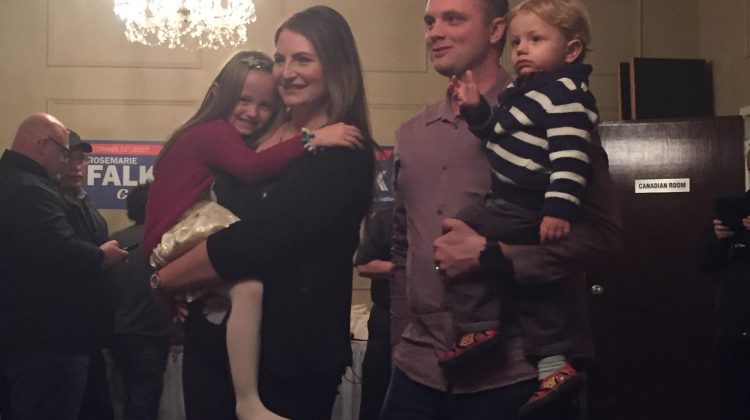 Rosemarie Falk and her family.

Battlefords-Lloydminster will remain a Conservative stronghold after Monday night’s by-election.

Rosemarie Falk started off with an early lead and continued to maintain a large lead as each polling station was counted. In the end she took 69.6% of the vote with 8,965 ballots cast for her. Her closest competition was the NDP’s Matt Fedler, who got 1,698 votes.

Falk says she has many people to thank, including the people of Battlefords-Lloydminster, her volunteers, family and even the Prime Minister.

“I think our wonderful Prime Minister had a hand in that. I think by him coming to North Battleford, he really rallied the people and kind of woke the people up. Basically they were told ‘we gotta get this done’ and get out there and make sure we vote.”

Falk says she has a many things to address  when she gets to the House of Commons.

“I know we have a Prime Minister right now who is imposing a carbon tax on us and we are not happy with that. Our small business tax, I mean something’s being reformed, we don’t know what it is, it’s implemented January. January’s coming up and we need to know what’s going on. I’m here to stand up for families.”