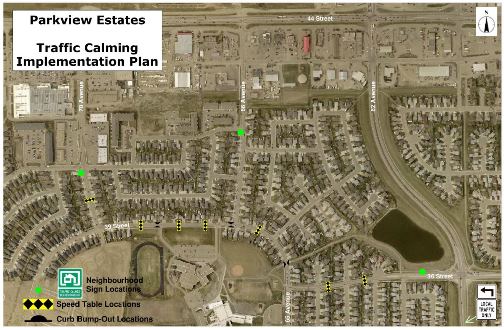 The City of Lloydminster says they will be putting in traffic calming measures in Parkview Estates.

Through the Traffic Calming Study and Policy Report, the City says they’ve learned that shortcutting traffic travels through Parkview Estates between 36 Street and 70 Avenue to access Highway 16.

The city says they will put in place 7 speed tables in the neighbourhood, along with curb bump-outs, timed signals, and updated signs. Four speed tables will be placed on 39 Street, two on 36 street, and one on 70 Avenue.

While the new measures are being installed, the city says residents should expect traffic disruptions, and plan alternate routes.