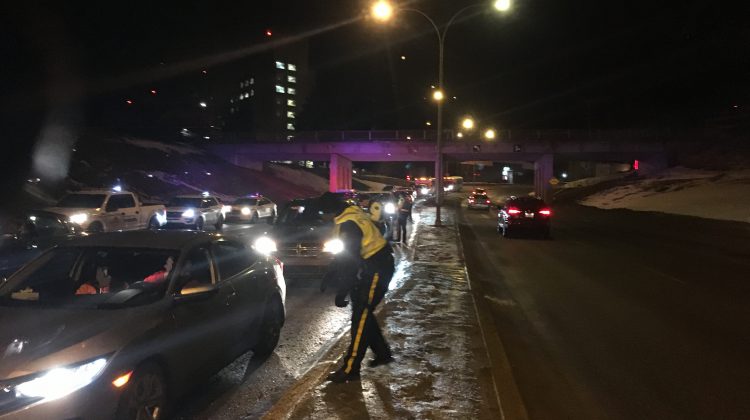 RCMP want to remind residents of tips for staying safe while travelling this holiday season, and throughout the winter. They suggest telling others when you leave and arrive at a destination and carrying warm clothes, blankets and extra food while driving on the highway.

This month is also Impaired Driving Awareness Month. RCMP confirm they will be conducting more check-stops before the end of the holiday season to watch for impaired drivers, distracted drivers or those driving dangerously.

“Impaired driving is generally the leading cause of death and injury in Alberta and on Canadian roads,” says Constable Michael Hagel. “It’s something that the RCMP takes very seriously. We’ll be conducting more check-stops going forwards this holiday season.”

RCMP encourage everyone to call a taxi service, have a designated driver, or call a friend to help you get home safely. This month RCMP have already conducted a check-stop with local peace officers and WPD ambulance members.

Close to 400 cars were pulled over, with no charges being laid. Sober drivers were treated with candy canes. RCMP hope this will send a positive message, and remind people of the consequences of impaired driving.

“If you’re caught driving impaired, the first offence is a $1,000 fine and a one-year driving prohibition,” says Constable Hagel. “The second and third offence is what’s called a step progression, and the penalty also increases.” Constable Hagel confirms that all impaired driving offences are criminal offences.

If anyone sees someone they suspect is driving impaired, they’re asked to ensure their own safety. RCMP say to pull over to the side of the road and call 911 to describe the vehicle, what they were doing and the direction of travel.