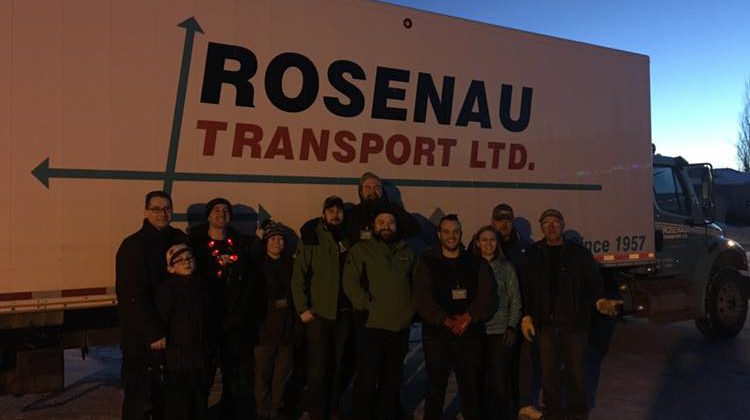 The 2018 Christmas Convoy, thanks to Rosenau Transport, brought over $52,000 in monetary and food donations for the Salvation Army. Photo: 106.1 The Goat/MyLloydminsterNow

Last weekend was The Goat’s annual Christmas Convoy, inspiring Lloydminster to give what they can to the Salvation Army food bank.

Staff from The Goat were posted to Superstore, Safeway, Sobey’s and the Co-op Marketplace accepting food and cash donations to the Lloydminster Salvation Army. With help from Rosenau Transport, over $52,000 in food and money were donated. That equals about 8,000 pounds of food and $1,867 in monetary donations.

Major Lisa O’Doherty says that this amount of food can feed one family for about a year and a half and that the Christmas Convoy is one of their largest supports.

“Every year the Christmas Convoy is one of our biggest food drives, and so we look forward to it for a number of reasons,” says O’Doherty. “One is because we know that going into the new year we have been able to fill our Christmas hampers, which this year we have about 350 hampers going out the door.”

O’Doherty says that beyond the Christmas season, the Christmas Convoy lets them assist families that still need help. She adds that they see about twelve to fifteen families per day.

“The number is still much higher than I’d like to see, we’d like to say we work ourselves out of a job when it comes to the food bank,” says O’Doherty. “Unfortunately, that has not happened this year, There’s still a huge need. We’re still seeing a handful of new families each week.

O’Doherty says that while they get to put a smile on someone’s face, it doesn’t happen through just them.

“We do that with the contribution of the whole community. The Goat, or other business or organizations or other individuals. The community coming together is what puts a smile on people’s faces when they go out our doors.”

Anyone can donate to the Lloydminster Salvation Army year-round by bringing toiletry items or food bank items to the church, which they will put to use.