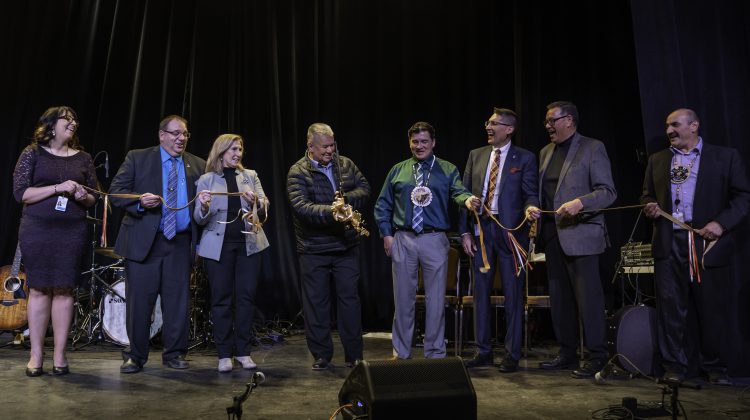 The Gold Horse Casino (GHC) has kicked off its soft opening tonight after spending a year-and-a-half in the making. The Border Tribal Council, the Saskatchewan Indian Gaming Authority (SIGA), and Little Pine First Nation held a ribbon cutting to celebrate the opening of SIGA’s newest casino.

MLA Colleen Young was present for the ceremony. The casino is right across the street from her constituency office and she’s seen the casino’s progression first hand.

“I was here for the sod-turning on June 12, 2017, and I’ve been watching the progression ever since. From the first pile of dirt that was pushed to the steel girders going up to the structure, and the signs. To be here today to see this fantastic facility open for our community is just amazing.”

Young says the casino’s presence has already improved the local economy. From the construction jobs going into the casino to the two hundred employees working at the GHC, she thinks there will be a great contribution from the GHC to the local economy in the future.

As the region’s MLA, Young has seen the work behind the GHC since it first began. She was part of the first conversations and meetings around what the end result will be.

When it comes to community pushback to a casino, Young prefers to see the positive in what the GHC will offer.

“There’s much more positive to look forward to, with regards to the economic uptake and things that will happen for our community. And I think that’s what we should focus on and the people it will support in our community,” says Young.

Wayne Semaganis, chief of Little Pine First Nation, is very pleased with the opportunity it will provide. He spoke of how it will benefit the people of his indigenous community and is looking ahead to the possibilities of new projects.

“We want to see a new hockey arena here, we want to see housing here. We want to see more than one mall. We have land here that we need to develop, so we need to find ways of bringing different business partners into the fold, and let them know it’s an open door. We’re here to do business,” says Semaganis.

Semaganis believes that business will help connect his community and the others surrounding it. He hopes that cooperating with other communities, indigenous and non-indigenous, will help build opportunity.

Semaganis says that he’s working on projects with federal ministers to help his community participate in the economy, and help other communities prosper.

“We’re moving ahead on these things. For too long the casino has been dominating the news, but there’s a lot of things that we’re working on, and they’re very progressive, very productive and good for everybody. The whole region.”

The GHC is SIGA’s seventh casino, and starting December 21 will be open seventeen hours a day, seven days a week, from 9 a.m. to 3 a.m Monday to Sunday and until 4 a.m. Thursday to Saturday.