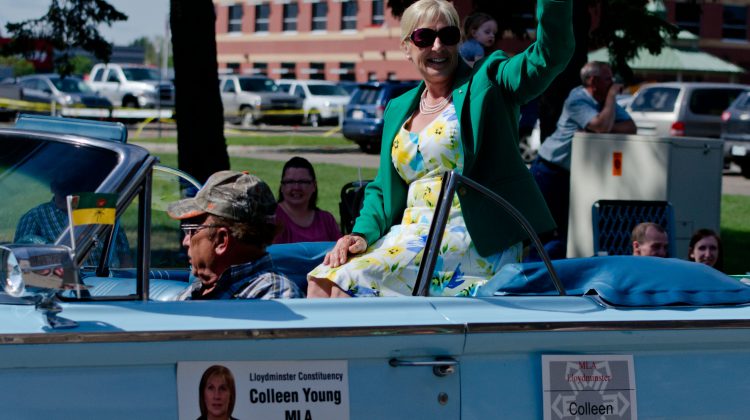 Lloydminster MLA Colleen Young waves to the crowd during the parade. Photo by James Wood/106.1 The Goat/Vista Radio

In an interview, Young told My Lloydminster Now.com that the provincial government has taken steps to present its court case against the imposed carbon tax.

She says that the results of that case are something she looks forward to in the new year and is confident in her government’s alternative plan.

“I think in February is when it will go before the courts, and we’ll see where that goes in the future. But I think that’s something we will continue to stand up for the people of Saskatchewan on, is no carbon tax,” says Young.

Saskatchewan has put forward it’s own climate strategy called Prairie Resilience. It’s an alternative to pricing emissions that focuses on building resistance to climate change in the environment, infrastructure and economy.

The plan also aims to help communities adapt and thrive in a changing environment and low-carbon economy.

Young believes Saskatchewan’s climate plan will do much more than carbon pricing for curbing emissions in the province while still supporting economic growth.

Young says the Saskatchewan government will continue its mandate of supporting the province’s economy, while also managing budget expenses.

Her job keeps her away from her family for long periods of time. Young is thankful for the support of her family and her constituents as she seeks nomination from the Saskatchewan Party in March.

Young is also thankful for includes living in Lloydminster and the people she’s surrounded by in the community.