Clubroot found in crops near Lloydminster: Government of Saskatchewan

Clubroot has been identified in crops near Lloydminster according to the Government of Saskatchewan. Clubroot is a soil-borne disease that restricts a plant’s ability to obtain water and nutrients from the soil resulting in the premature death of plants. 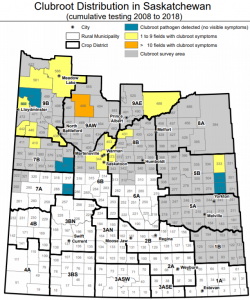 The government sent out a release Wednesday to let farmers know where the plant disease has been located. On the Map between 1 t0 9 fields have shown symptoms between the Lashburn to the paradise Hill area. Also,  the disease has been detected between the Onion Lake to Meadow Lake area, no symptoms were visible. The results come from surveys done in 2017 and 2018, and reports made to the ministry by producers and agrologists. In 2018, around 1,500 fields were tested as part of the survey.

Saskatchewan says the best way to manage the disease is by keeping pathogen levels low to minimize the impact on canola fields. According to the release, clubroot management strategies should include the use of clubroot-resistant canola varieties in a minimum of a three-year rotation. Extended crop rotations will help to reduce losses while protecting the effectiveness of clubroot-resistant canola varieties

Clubroot is a declared pest under Saskatchewan’s Pest Control Act, it’s been confirmed that 43 commercial canola fields and three other fields with no symptoms have been identified with the disease in the province.

Agriculture Minister David Marit says the detection of the disease is important to the agriculture industry, helping make decisions towards clubroot management.

“We consider awareness and education of clubroot to be priorities, as both will help prevent the spread of the disease in Saskatchewan.”

All landowners/producers with visible clubroot symptoms have been contacted and will be required to develop a clubroot management agreement.  Saskatchewan says that all clubroot-infested fields will be monitored by an appointed Pest Control Officer.